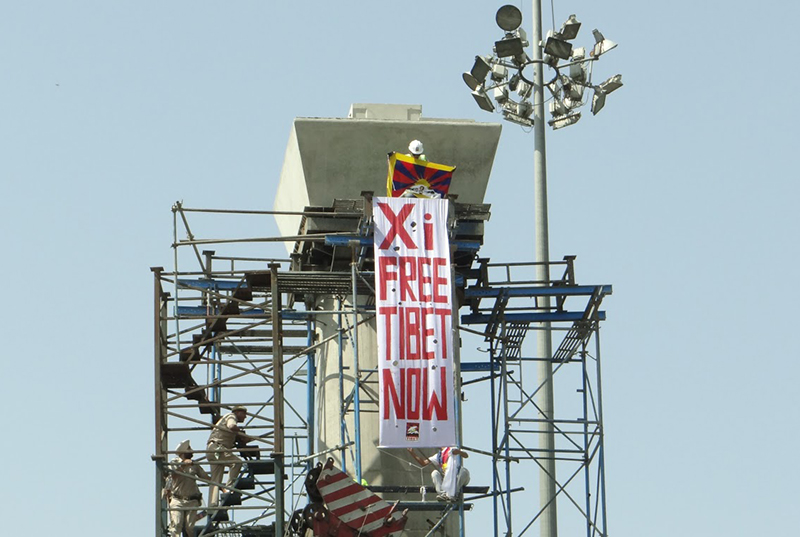 New Delhi, September 18: - This morning at 10 am, four Tibetan activists of Students for a Free Tibet-India (SFT-India) unfurled two big 16 x 5 feet banners from a tall electrical pole and a metro construction pillar just 50 metres away from the Taj Palace Hotel on Thursday where the Chinese President Xi Jinping is residing during his two day visit to New Delhi.

The banners reading "Xi: Free Tibet Now" was dropped as Xi Jinping was entering Taj Palace Hotel in order to directly confront the Chinese leader about the crimes against humanity and the illegal occupation of Tibet. The activists were all arrested and are currently in police custody.

"Xi Jinping is leading one of the most oppressive military offensives that Tibetans have faced in the past 50 years of China's occupation of our country. Only last month Chinese forces shot and killed five Tibetan who were peacefully protesting the arrest of their village leader in Dema, eastern Tibet. This is just one of many examples of Xi Jinping and the Chinese government's brutal rule in Tibet," said Dorjee Tseten, Asia Director of Students for a Free Tibet International. "During his visit, Xi Jinping will blatantly lie about the crisis in Tibet, but we are here to speak the truth as entire towns and villages in Tibet are under military lockdown. Until Xi ends the occupation in Tibet, China will never truly experience peace and stability, or global respect its leaders so desperately seek."

One of the activists, an Indian supporter, locked himself to the base of the electricity pole with an iron chain, shouting "Tibet's Independence is India's Security". "I am a member of Students for a Free Tibet-India, and I joined this protest against Xi Jinping to support the Tibetan freedom movement," said Siddhant. "We cannot give up our values of freedom, justice and democracy, for which our ancestors sacrificed their lives during our freedom struggle, in exchange for economic benefits with the CCP Regime, one of the most cruel dictatorships of our times", he said before being arrested.

Towards the end of Xi Jinping's meeting with Prime Minister Modi at Hyderabad Bhavan this afternoon, 14 Tibet activists staged a blockade outside the venue, were detained and are currently in police custody. The activists were wearing 'Free Tibet' t-shirts and carried Tibetan national flags as they shouted slogans to shame Xi Jinping for his crimes in Tibet. In the last five years, over 130 Tibetans have set themselves on fire against Chinese oppressive rule. This protest was carried out to highlight the ongoing human rights crisis inside Tibet.

"As a Ladakhi I have seen China's bullying tactics at our northern borders almost everyday, even now during Xi's visit 1000 Chinese troops entered Ladakh," said Spalgon Kanji, a Ladakhi student who was part of the protest at Taj hotel. "The ultimate lasting solution to India's national security from China's military expansionism will only come through advancing freedom in Tibet", he added.

Indians and Tibetans across the country have urged PM Modi to strongly advocate for a just resolution to Tibet's occupation during his inaugural meeting with Xi Jinping as a first step to securing India's interests along the Himalayan border. More than 4,000 Indians signed a petition calling on the Prime Minister to take a bold step in bringing up the crisis in Tibet with Xi Jinping. The petition was delivered to PM Modi's office in South Block earlier this week by members of Students for a Free Tibet - India .

Tseten sai that 'the settlement in New Delhi, Majnu-ka-Tila has been entirely sealed to prevent any protests during Xi Jinping's visit. Tibet protesters, however, have been following Xi during his visits across the capital.'