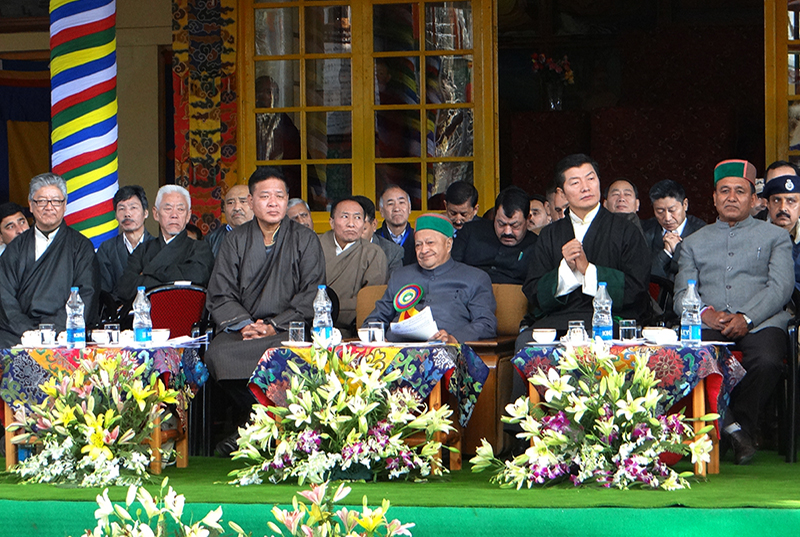 Shri Virbhadra Singh, Hon'ble chief minister of Himachal Pradesh as Chief Guest joined thousands of Tibetans and Tibet supporters in celebrating the 66th International Human Rights Day and the 25th anniversary of the award of the Nobel peace prize to His Holiness the Dalai Lama at the main Tibetan Temple in McLeod Ganj hill town, on Wednesday, December 10, 2014.

Speaking at the launch of the Himalayan International Festival-2014 in Dharamshala to the special occasion, the Chief Minister said: "Tibetans are an inseparable part of our family for the people of Himachal. We want them to flourish and will always be on their side."

Expressed his happiness for the invitation and paid his deep reverence to His Holiness the Dalai Lama, the chief minister said that his family has had a long relationship with the Tibetan people since the time of the 5th Dalai Lama of Tibet.

"It is sad that all centres of religious faith and monastic institution in Tibet remain under tight restrictions and we wish for the success of efforts of the Dalai Lama for the liberation of Tibet," he added.

Closing his speech with best wishes for a quick resolution of the Tibet issue, he said His Holiness is a symbol of true spiritual guru, who works for the Tibetan people.

Sikyong mentioned that the Central Tibetan Administration (CTA) takes pride in its democratic form of administration, a legacy of His Holiness the Dalai Lama's leadership.

Sikyong reiterated that the "Middle Way Approach", the official policy of the CTA to resolve the issue of Tibet is a win-win solution for both China and Tibet, and the best way to solve Tibet's issue is to have dialogue with the envoys of His Holiness the Dalai Lama.

As 10 December is also marked as the International Human Rights Day, Sikyong, on behalf of the CTA, Central Tibetan Administration prayed for the Tibetans inside Tibet. He also reiterated that the Chinese govt. should release Tibetan political prisoners.

Sikyong expressed his appreciation and gratitude to the people and government of India for their continued support to Tibet including the recent announcement of Tibetan Rehabilitation Policy 2014.

Mr Penpa Tsering, the Speaker of Tibetan Parliament also expressed his deep gratitude and sincere thanks to the Chief Minister of Himachal Pradesh for his gracious presence and the people of the state for their support.

The speaker said that 'His Holiness the 14th Dalai Lama is the true legacy of Ahimsa, laid by the great Mahatma Gandhi.'

Shri Vijai Singh Mankoita also spoke at the occasion. He said that 'around 230 artists from the different parts of the Himalayas, including Arunachal Pradesh, Sikkim, Uttarakhand, Jammu and Kashmir, Punjab and Rajasthan will participate in the two-day cultural programme, while CTA has invited cultural performers from the Republic of Kalmykia, Mangolia and Bhutan.'

During the event, the chief guest and top CTA officials have launched several new books – including "His Holiness the Great XIV Dalai Lama and Tibetan Democracy A Tribute," "His Holiness the XIV Dalai Lama – Souvenir," "Tibet Policy Journal," "Voice Of An Exiled Tibetan," "How Nonviolent Struggle Works" (Tibetan Version), and a new book with a title roughly translates as "Lost Country: Happiness and Suffering of A Father and His Son."