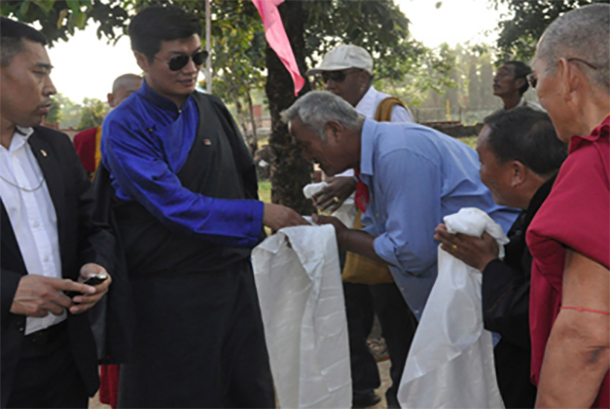 Dharamshala: - Sikyong Dr Lobsang Sangay, the elected political leader of the Tibetan people said that his administration is always committed to resolving the problems faced by the exiled Tibetans.

His comments about the matter came during a public address to the local Tibetan community of Mundgod in South India, on 29 December, 2014.

Sikyong said that the Tibetan public have shared their "grievances" with me during my visits to the Tibetan settlements- "particularly regarding electricity, water supply, schools, hospitals and roads."

"I have duly recorded these grievances and regularly discuss it with the Kalons on ways to resolve these issues during our weekly meetings on Tuesday and Friday," Sikyong said.

According to a CTA media report, Sikyong also said he explains these difficulties faced by the Tibetan people during his visits abroad, in order to raise funds to resolve it.
"The funds raised are then distributed to the various Tibetan settlements as per needs and requirements," Sikyong said, adding, that his visits abroad have been crucial for raising funds and generating financial and political support to run the administration.

He told the gathering that during his three years in office, he has visited all the Tibetan settlements and schools in India, and most of the major Tibetan communities in Europe and North America. Sikyong however noted that "the general situation of the Tibetan community is quite well."

Sikyong expressed his appreciation for the initiatives by the Tibetan communities in US and Europe to assist the settlements in India. These initiatives, including facilitating drinking water, road constructions, and better electricity supply.