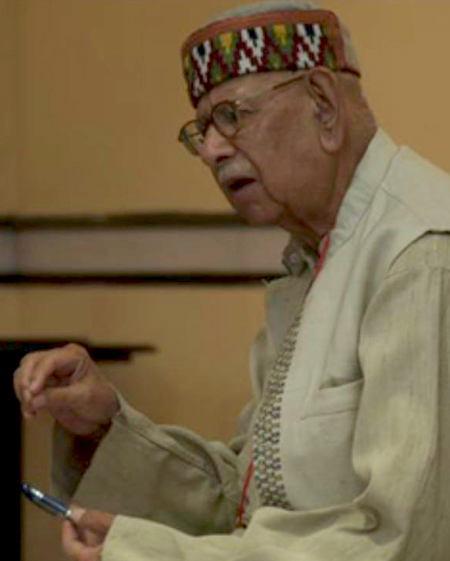 Dharamshala: - Both the Cabinet and the Parliament, which represent the Central Tibetan Administration (CTA) have expressed their deepest condolences over the passing away of Shri Kul Bhushan Bakshi, a staunch Tibet supporter and a long-time friend of the Tibetan people.

Shri Bakshi, who was known as an ardent Tibet supporter passed away on Monday morning at the age of 85, in Meerut, a city in northern Indian state of Uttar Pradesh.

In a letter to his wife Mrs Sunder Bakshi, the Kashag (Cabinet) said, "We are deeply saddened by the passing away of Shri. Kul Bhushan Bakshi. We have lost a dear friend and an ardent supporter of the Tibetan people."

"The Kashag of the CTA, hereby, offer its heartfelt condolence to you and your family. We also pray for his soul to rest in peace," it said.

Khenpo Sonam Tenphel on behalf of the Tibetan Parliament in Exile (TPiE) has sent its deepest condolence to the bereaved wife and family members.

"On behalf of all the Tibetans, the Tibetan Parliament-in-Exile is deeply saddened by the demise of your beloved husband, who was a dear friend and an ardent supporter of Tibet for a very long time," Ven Tenphel who is the Deputy Speaker of the TPiE said.

"We express our heartfelt condolence to you and your children and pray for his soul to rest in peace," he added.

Bakshi was an active National Co-Convener of the Core Group for Tibetan cause. He served as the President of Antarashtriya Bharat Tibbat Sahyog Samiti till his last day.

He celebrated his 85th Birthday on 24 June this year. He is survived by his wife Mrs. Sundar Bakshi, one son and two daughters.

Mr Bakshi came into contact with Tibet when he was posted in Mandi as Director of Khadi-garam Udyog in 1964. He was known as one of the staunchest active and devoted supporters of the Tibetan people and for the cause of achieving the ultimate freedom of Tibet. Shri Bakshi was the National Co-Convener of the Core Group for Tibetan cause and also headed till his last day the organisation called Antarashtriya Bharat Tibbat Sahyog Samiti, based in Meerut.