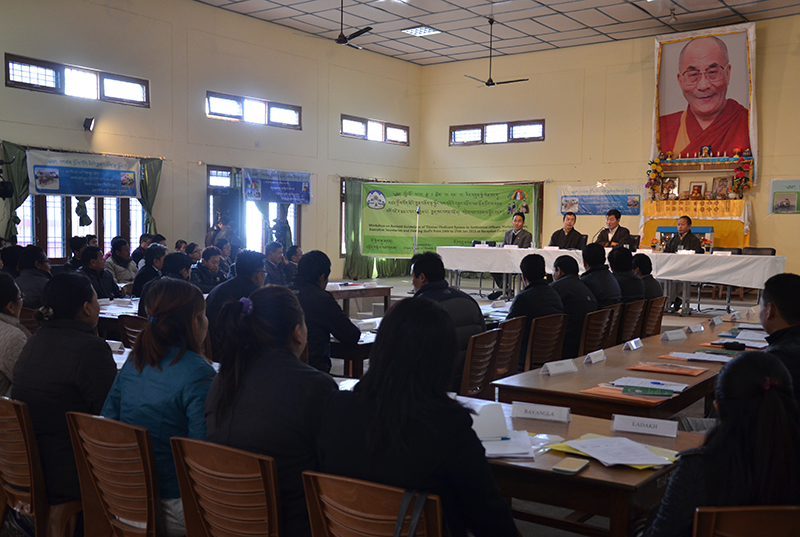 Dharamshala: - The political leader of Tibetans, Sikyong Dr Lobsang Sangay spoke to a gathering of over 52 people including Tibetan settlement officers, Tibetan doctors, hospital administrators and healthcare workers who participated in a workshop.

The two-day workshop on Tibetan Medicare System (TMS), was held at the Reception Centre for New Arrivals from Tibet, Lower Dharamshala, India on 24th -25th January, 2015.

Speaking on the prevalence of economic disparity in the Tibetan community, Dr Lobsang Sangay said that the Tibetan Medicare System will ensure effective financial help for all including the poor during medical emergencies.

"The general economic condition of the Tibetan people has improved a lot since the early days of Tibetan exile. However, I have noticed during my visits to the Tibetan settlements that there are still Tibetans who continue to remain poor," he said.

"Despite our best efforts, reaching out to each and everyone is challenging. Therefore, the Tibetan Medicare System is a novel initiative to ensure financial help to the poor during medical emergencies," Sikyong added.

"The TMS is currently in its third year since its launch in 2012. In the past three years, over 30,000 Tibetans have enrolled in the project and around 1800 have already availed the benefits of it," he said.

However, Sikyong said that "the TMS is still dependent on funds. Hence, more participation of the Tibetan public is crucial to make TMS self-reliant and to pre-empt financial constraints during medical emergencies for the poor."

Dr Sangay repeated his appreciation to the US Congress for providing an additional 3 million USD in financial aid to the Tibetans under a new line item recently.

He further added that 'the sanction of the new funds by the US Congress which was duly approved by the US President reflects the support of the US and other countries towards the activities and leadership of the CTA.'

'The Tibetan Medicare System is one of the five most important projects of the CTA that has been prioritised by the present Kashag,' Health Kalon Dr Tsering Wangchuk said while addressing the gathering. Explaining the purpose, objective and scope of workshop, he urged the participants to create more awareness about the project so as to increase enrollment from the public.

Dr Wangchuk also explained the allocation of the 3.2 million USD awarded by the US government for the Tibetan Health System Strengthening Project. According to him the funds are allocated on three main activities of the Health Department namely i) its main projects including TMS, Mother & Child program, TB programs, etc, ii) capacity building of staff such as workshops, trainings, and iii) preventive measures like vaccinations, MTR TBs etc.

The workshop is organised by the Department of Health, Central Tibetan Administration to discuss the revised guidelines and boost participation of the Tibetan public in the medical insurance project.

The workshop was presided over by Dr Aloke Gupta and Dr Francis Raj. Topics discussed in this workshop include, community engagement and its implication on the scheme, Identifying effective mode and channel of communication for enhancing enrollment of scheme, etc.

According to TMS, a family of five members has to pay an annual contribution of INR 3565 and an extra INR 713 per year for each additional member to avail benefits of upto 1 Lac Rupees. This include cost of hospitalization, medicines, etc. Individuals have to pay INR 950 to avail benefits of up to 50,000 at selected hospitals.

TMS is a non-profit secondary and tertiary health care coverage - aimed to abet financial security to the Tibetan public during medical emergencies.