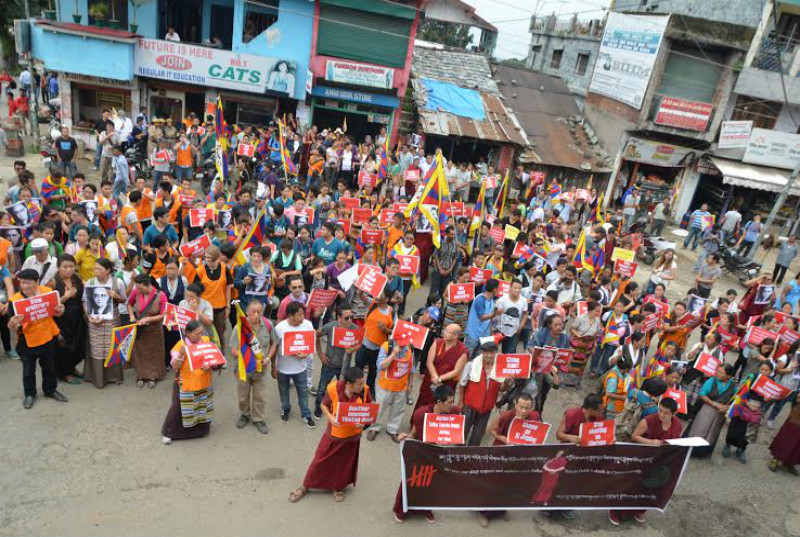 Dharamshala — The air was thick with anger and deep anguish. On Saturday, July18, several hundreds of Tibetans took part in a protest march, expressing their solidarity with deceased Tibetan monk and political prisoner Tenzin Delek Rinpoche. Armed with Tibetan flags, posters and banners seeking justice from the Chinese government, the protestors, both, young and old, walked from McLeod Ganj, the capital of Tibetan Exile-Government to Kachari at Lower Dharamshala.

"China is fully responsible for Rinpoche's death. We hold China accountable for his murder in prison," said Gelek Jamyang, president, National Democratic Party of Tibet. "This incident reaffirms our longstanding position that the Chinese Communist Government cannot be trusted. We call upon all Tibetans to remain steadfast and intensify our campaigns for the freedom of Tibet and the Tibetan people," said Tenzing Jigme, president, Tibetan Youth Congress.

The protest march was jointly organized by five organizations including Tibetan Youth Congress, Tibetan Women's Association, Gu-Chu-Sum Movement Association of Tibet, National Democratic Party of Tibet and Students for a Free Tibet, India. The protest was hinged on a three point agenda- to demand a clear answer from the Chinese government on the murder of the monk, to end the violent crackdown against peaceful protestors and to seek an intervention by the United Nations into the monk's suspicious death.

On July 12, Rinpoche, a greatly revered monk was reported to be dead in prison in Chengdu, Sichuan province. Ever since the news was broken by the Chinese authorities to the deceased monk's sisters, questions have been raised about the nature of his death, which has been touted as "mysterious". Rinpoche was arrested in April 2001 and subsequently sentenced to death on charges of 'crimes of terror and incitement separatism'. Following a wide campaign, his sentence was reduced to life imprisonment. He maintained his innocence throughout the years in prison.

"I am heartbroken at the loss of my dear cousin and our beloved Buddhist teacher. Tenzin Delek Rinpoche was an innocent monk who suffered over 13 years of imprisonment, torture and abuse in a Chinese prison for simply advocating for the rights and well-being of His Holiness the Dalai Lama," said GesheNyima, cousin of Rinpoche, who lives in Dharamsala.