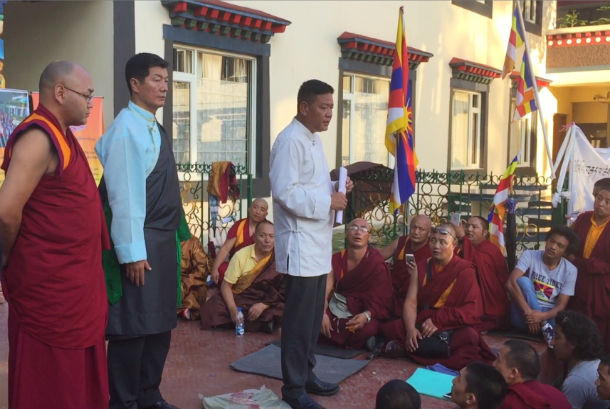 Dharamshala — The Tibetan cabinet (Kashag) and parliament-in-exile have urged followers of "Jonang" tradition to respect the legislature's decision rejecting their request for the allotment of a membership seat in the Parliament.

Dr Lobsang Sangay, Sikyong or political leader of the Tibetan people, and Mr Penpa Tsering Speaker of the Tibetan Parliament-in-Exile, spoke to a group of the Jonang followers who are gathered in front of the parliament building to protest against a recent resolution rejecting their demands.

A group comprising of about 150 protesters holding signs outside of the Parliament building appealing for the allotment of a membership seat in the Parliament for Jonang tradition.

The protesters are also demanding recognition from the Parliament for a separate tradition of Tibetan Buddhism. They first emerged in 1990 and have been demanding the TPiE to recognise their tradition.

The motion to allow membership for Jonang tradition as a separate Buddhist sect failed in the Parliament during a majority vote held in the 9th session of the 15th Tibetan Parliament. The amendment is possible only if supported by 29 members in the 44-member parliament, but only 17 voted in favor of the motion.

Speaking to the gathering, Speaker Penpa Tsering "urged the protesters to exercise restraint while upholding due deference to the judgment passed by the Tibetan Parliament," the Tibetan administration media reported.

Penpa Tsering further explained that time for discussion on the issue was allowed but none of the parliamentarians took the opportunity.

The Speaker also "advised the Jonang followers to utilise the democratic processes of lobbying and convince the Tibetan parliamentarians especially the members of the upcoming 16th Tibetan Parliament to resolve the issue, rather than staging a sit-in and disrupting the ongoing 10th session."

Mr Tsering also "lamented the heckling of a particular member of parliament by few of them on 17 September that was completely uncalled for and added that the incident has reduced the support and solidarity of the Tibetan parliamentarians on the issue."

"As per the three pillars of democracy, the Tibetan Parliament legislate the laws, the Kashag executes them and the Tibetan Supreme Justice Commission monitors the execution to ensure rule of law," Dr Lobsang Sangay said, explaining the importance of respecting the judgments made by democratic institutions of the Tibetan polity.

"The harmony of these three pillars determine the success of a democracy," Dr Sangay said.

On the issue of the creation of parliamentary seats for Jonang tradition, Sikyong urged them to uphold the majority judgment passed by the Tibetan Parliament.

As for the Kashag, Dr Sangay further explained that "the 14th Kashag follows the guideline set by the previous Kalon Tripa Prof Samdhong Rinpoche regarding religious traditions, adding that the present Kashag treats Jonang as a major Tibetan Buddhist tradition as stipulated in the guideline."

Nine members of the group have started a hunger strike on Friday, September 18. They said they will continue until the TPiE fulfil their four demands.

TPiE is the unicameral and highest legislative organ of the Central Tibetan Administration. Established and based in Dharamshala, India.

Ten members are elected from each from Do-toe, Do-med, and U-Tsang, the three traditional provinces of Tibet, while the four schools of Tibetan Buddhism, including Nyingma, Kagyu, Sakya, Gelug and the traditional Bon faith elects two members each.

Four members are elected by Tibetans in the west, two from Europe, one from North America and one from Canada.

On March 26, the House voted to give a separate, one-seat for the Tibetans living in the Australasian and Asian countries other than India, Nepal and Bhutan.