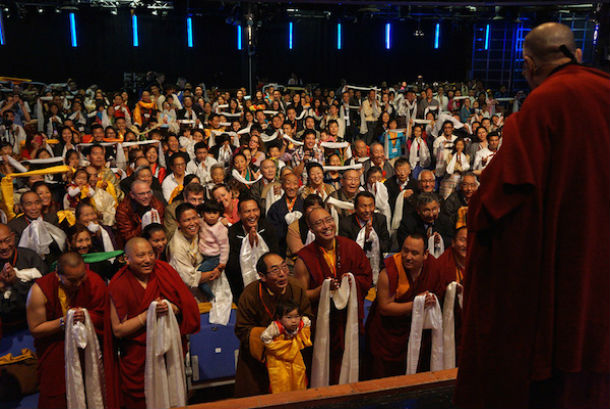 London, England — "According to archaeological findings, Tibetan civilization is ancient," His Holiness the Dalai Lama said during a meeting with over 700 Tibetans from Britain and other countries of Northern Europe, on September 19.

"We Tibetans have a special karmic connection to have been born as Tibetans under your leadership. We are united because of you. We are doing our best to contribute to the Tibetan struggle," Tsering Passang, who read a report, outlined the funding and support that UK Tibetan community.

The report said that there are more than 700 Tibetans in the UK today, and of those a third are less than 18 years old.

"During this difficult period in our history I haven't been able to do very much. But I've done what I could and you've placed your trust in me," His Holiness said in response to UK Tibetan community report, outlined numbers of issues, including support to education among Tibetans in terms of scholarships.

"According to archaeological findings, Tibetan civilization is ancient. The Tibetan Emperor, Songtsen Gampo, took a Chinese wife and a Nepalese wife. Both of them brought statues of the Buddha to Tibet."

"In the 8th century, Trisong Deutsan, despite existing close relations with China, specifically turned to India as the source for bringing Buddhism to Tibet. He invited top Nalanda scholar Shantarakshita, a philosopher and logician to teach."

Shantarakshita encouraged the translation of Buddhist literature into Tibetan. He is said to have even begun to learn Tibetan himself. Samye Monastery was founded with separate departments for Vinaya, translation and so on."

"We need to keep up our efforts, especially monks and nuns. Just studying the 'Great Stages of the Path', (Lam Rim) is not enough," he said, speaking on the Tibetan system of Buddhist education.

"The 'Clear Ornament for Realization' says study the Three Jewels in terms of the Four Noble Truths and the Two Truths."

"We need to be proud of our traditions without being arrogant. The Chinese Communists have been killing and torturing Tibetans for years, but our spirit is still strong," His Holiness added.

"We're tough. This can't have been what they expected. We need to keep it up, particularly with regard to our standards of education."

Meeting with friends and supporters of Tibet, His Holiness began by voicing his concern for Tibet's environment. He mentioned that because of the fragility of the environment at altitude any damage that takes place will take longer to recover than elsewhere.

He mentioned the Chinese ecologist who asserted that the Tibetan Plateau is as important to the global climate as the North and South Poles. He called Tibet the Third Pole. His Holiness noted that an estimated 1 billion people across Asia depend on water from rivers that rise in Tibet.

"Buddhism came to Tibet," he said, "and transformed our culture into a culture of peace and non-violence. This is something truly worthwhile in the world today. China needs such a culture too."

"It is traditionally a Buddhist country and there are now said to be 400 million Chinese Buddhists, many of them interested in Tibetan Buddhism. Many of those I meet invite me to come to China."

His Holiness stated that Tibet is materially backward and in need of development. He cited the number of Tibetans who make their way to the West, some of them illegally. They seek material development, not spiritual growth.

He pointed out that there can be mutual benefits from Tibet's remaining with China. He acknowledged that there are young Tibetans and others who consider that they should be fighting for complete independence, and that is their right, but they also have to be realistic.

"I'm happy to know that we have such longstanding friends here among you. Please help us preserve our values, our spirituality and our knowledge," ," His Holiness said, while remembering the historic close relations between the UK and Tibet.

"They can be of immense help not only to us, but also to the people of China."