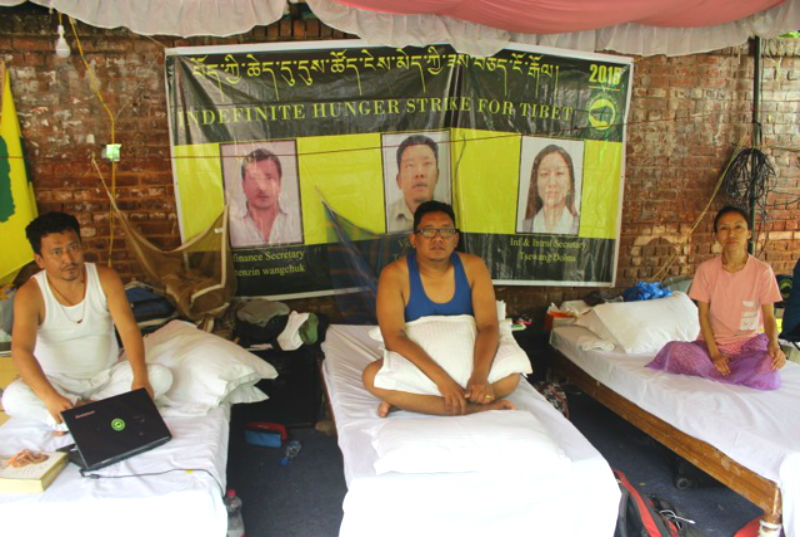 New Delhi — The Tibetan Youth Congress began a hunger strike on September 10th, 2015 in an attempt to gain the attention of the United Nations and encourage action and intervention in Tibet.

The TYC updated about their "Indefinite Hunger Sstrike," stating. "thirteen days and 312 hours later, without any food, the three Tibetan Youth Congress Executive members on hunger strike (2male, 1 female) bodies are weak but their minds are strong and their will to go on with conviction and determination is even greater."

"This campaign is aimed at the United Nations who has a responsibility to stand up and speak up for truth and justice. Resolutions on Tibet have been passed at the UN General Assembly but the communist Chinese government is never held accountable for their actions."

TYC's demands for the UN include:
1. United Nations member states to raise the issue of Tibet at its General Assembly and Human Rights Council Session
2. Urge China to address the demands of the Self Immolations in Tibet
3. Urge China to give evidence that the 11th Panchen Lama Gendun Choekyi Nyima is alive
4. Send a fact-finding UN delegation to assess the current critical situation in Tibet
5. Urge China to release all political prisoners

In addition to the United Nations, the TYC also urges United States President Barack Obama to speak strongly on the issue of Tibet with Xi Jinping when they meet in Washington DC. "Leaders of the world have a responsibility to speak up for those oppressed", stated TYC President Tenzing Jigme. "We ask that the President not only raise the issue of Tibet with Xi but send a strong message that human rights and freedoms of Tibetans must be respected", added Jigme.

On hearing the news that the delegations of the United States and the European Union who TYC has been lobbying have raised the Tibet issue at the ongoing 30th Human Rights Council session in Geneva, TYC VP Tamdin Hrichoe who is one of the participants of the Indefinite Hunger Strike said, "reports that the US and EU have raised the issue of Tibet at the Human Rights Council session is welcoming and one of our demands, but we will continue until the aims and objectives are met".

"We consider this, in a way, an impact of TYC indefinite hunger strike being held here. We had met with US Embassy and European Union officials recently in Delhi, and appealed them to raise Tibet issue in the UN General Assembly and Human Rights Council meetings," TYC President Tenzing Jigme said on Tuesday.

H.E. Mr. Jean-Marc Hoscheit, Permanent Representative of the Grand-Duchy of Luxembourg on behalf of the European Union, and the delegation of the United States of America, Ambassador Keith Harper reportedly gave statements calling China to cease undue restrictions on religion in Tibet and urged to address the root causes of unrest and foster dialogue with Tibet.