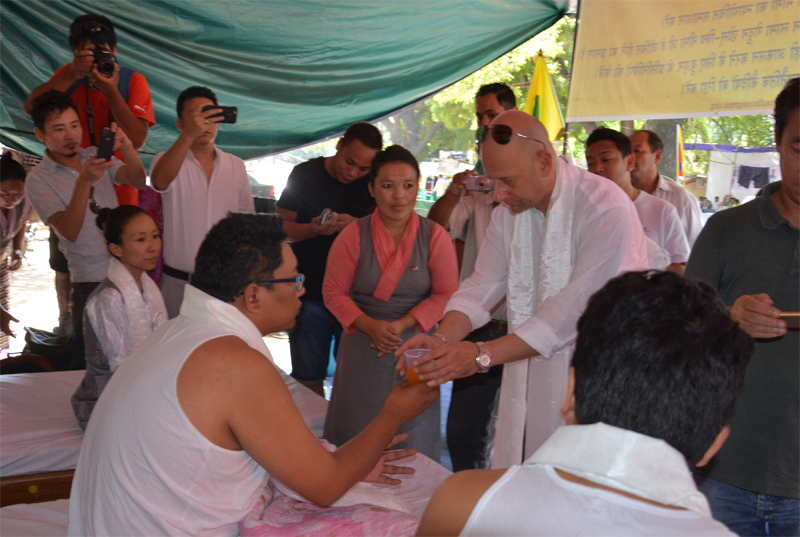 New Delhi — On October 11th, the 32nd day, the Tibetan Youth Congress's indefinite Hunger Strikehas officially ended after receiving a response from the United Nations. In a letter to TYC Hunger Strikers, UN Assistant Secretary General of the Office of the Human Rights Commissioner Ivan Simonovic requested the hunger strike to cease and assured TYC that the voices of the Tibetan people will be heard.

The letter was delivered to TYC by Yuri Afanasiev the UN Resident Coordinator and UNDP Resident Representative in India. TYC President Tenzing Jigme said, "this is a huge victory for the Tibetan people." He added that, "the power of non-violence methods of resistance and the fact that when we come together and fight for our country as one – we win, is evident from this victory."

The hunger strike was launched on September 10th and participants included three TYC executives, Tamdin Hrichoe, Tenzin Wangchuk and Tsewang Dolma, who was forcibly taken to the hospital by police on September 30th.

The campaign has witnessed huge support and solidarity from Tibetans all over the world as well as Indian leaders and members of the community, as various Indian Members of Parliament, former Ministers, social activists, student organizations and supporters of Tibet visited the hunger strikers.

TYC claimed in a press release that the success of the strike has inspired a whole new generation of young Tibetans, invoking a sense of renewed nationalism and patriotism to the Tibetan freedom movement. Tamdin Hrichoe added, "Support from students, youth and members of the community has been great. That kind of support and unity is very important in our struggle and must continue in order for us to win our country back."

The hunger strike participants have now been taken to the hospital for evaluation and recovery.