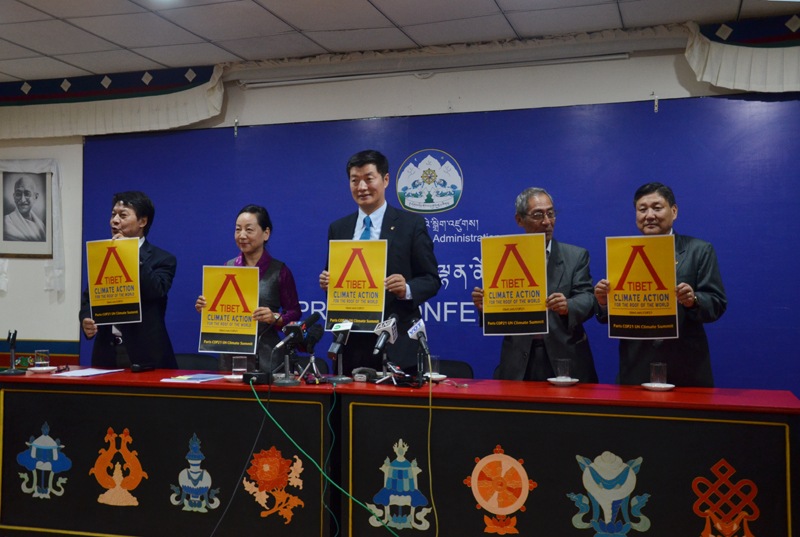 Dharamshala — "Tibet needs to be on the agenda at the upcoming United Nations Climate talks (COP21)," the Central Tibetan Administration said at a press conference in Dharamshala, India, October 20.

"This blue planet is our only home and Tibet is its roof. As vital as the Arctic and Antarctic, it is the Third Pole" said His Holiness the Dalai Lama. "The Tibetan Plateau needs to be protected, not just for Tibetans but for the environmental health and sustainability of the entire world."

The Tibetan Plateau is an environmentally strategic area. Known as the "Roof of the World", it is the highest and largest plateau on earth. It has an average elevation of more than 4,000 meters above sea level and an area of 2.5 million square kilometers.

"To raise awareness and encourage climate action for the Roof of the World, the Central Tibetan Administration today launched a social media action calling on world leaders at the Paris summit to make sure that Tibet is part of climate solutions," the CTA said.

"The Tibetan Plateau needs to be protected and Tibetans must be the stewards of their own land so they can take care of the Roof of the World which supports half of humanity." said Dr. Vandana Shiva, renowned Indian scholar and environmentalist. "His Holiness is sounding the warning bell for the health of the planet and we need a groundswell of support for climate action for the Roof of the World as world leaders gather in Paris."

Tibet is increasingly experiencing the effects of climate change. The Tibetan Plateau has seen an increase in temperature of approximately 0.3 degrees Celsius every ten years. This means that over the past 50 years the temperature has increased by 1.3 degrees Celsius—three times the global average.

Tibet is facing the impact of climate change with retreating glaciers, deteriorating permafrost, degrading grasslands and increasing desertification. Over the past 50 years, 82 per cent of the ice has retreated and over two-thirds of the glaciers could be gone by 2050.

The Alpine Permafrost, which plays a critical role for the health of the planet, is at serious risk. On the Tibetan Plateau, the Alpine Permafrost stores about 12,300 million tonnes of carbon. But 10 per cent of this permafrost has degraded in the past decade. The Tibetan Plateau is also facing increasing desertification. The United Nation Development Program reports that Tibet's grasslands are turning into desert at a rate of 2,330 square kilometers per year.

"Tibetans must have a say on what happens to their land," said Sikyong Dr. Lobsang Sangay. "Tibetan nomads are the expert custodians of the alpine pastures and their knowledge and experience must be recognized. And China's recently introduced Environment Protection Law must be used as a legal framework to hold the Chinese government to account. This law should be fairly and rigorously implemented in Tibet."

"Solutions to the climate crisis exist. What is needed is political will and action," said Kalon Dicki Chhoyang the Central Tibetan Administration's Head of Department for Information and International Relations.

At the COP21 meeting, progress must be made on the development of a new international climate change agreement with the adoption of a new climate plan. Such a plan needs to have meaningful and transparent commitments from all governments," the CTA said.

It stated that "world leaders gathering in Paris must commit to reaching to a strong climate agreement. Tibet's importance to the health of the planet must be recognized and Tibet must be central to global climate change discussions."