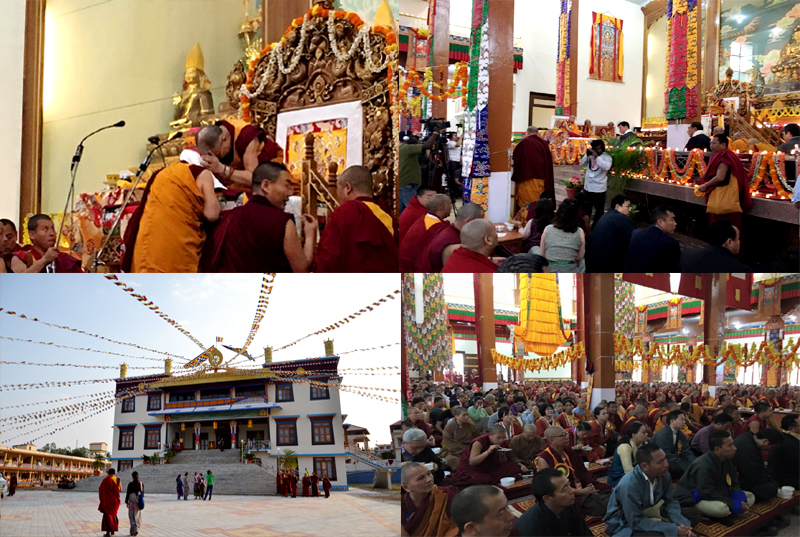 His Holiness unveiled a plaque and cut the ribbon across the door to inaugurate the new assembly hall. Some of the several thousand monastics gathered to listen to His Holiness the Dalai Lama at the Sera Mey Monastery.

Among those dignateries in attendance were head of the Gelug School, His a Eminence Gaden Tripa; Sikyong Dr Lobsang Sangay, political leader of Tibetan people; Tibetan MPs and NGO representatives.

His Eminence Kyabje Gosok Rinpoche offered the mandala and three representations of the enlightened body, speech and mind. His Holiness then gave a succinct transmission of Je Tsongkhapa's 'Three Principles of the Path'.

"Je Rinpoche said we should not be content with a rough understanding of the teachings, but should study all kinds of texts. We should aspire not only to be scholars, but to also apply the teachings as he did. He practised day and night, and abandoned the eight worldly concerns. We should follow his example and not approach our studies the way we might hoard possessions in our rooms."

His Holiness said that Ngawang Drakpa had requested advice and received this text, 'Three Principles of the Path' in response. He said that he had received it from both Tagdrak Rinpoche and Trijang Rinpoche. His Holiness described the three principles, the determination to be free, the awakening mind of bodhichitta and the wisdom understanding emptiness, explained here in terms of dependent arising, and concluded with the advice that ends the text:

"There have been many great scholars from Sera Mey. Just as I told the monks of Phukhang Khangtsen at Ganden, you are the original members of the Pobhor Khangtsen, who followed my advice about Dolgyal.

"Of course, I originally did the practice too, but after thorough examination I found that it wasn't any good. So after conducting several investigations, I stopped the practice. Both my Tutors were then alive. I reported my findings and my decision to cease the practice to Kyabje Trijang Rinpoche. He approved of the measures I had taken. It's not as if I was doing anything behind his back. He was pleased with the steps I had taken.

"Monks of Ganden Jangtse had reported untoward incidents to do with the monastery to Kyabje Trijang Rinpoche. He told them that they were a result of Palden Lhamo's displeasure and they approached me for advice about what to do. My investigations confirmed that Palden Lhama was involved and that her displeasure was about Dolgyal.

I told Serkhong Rinpoche and the Abbot of Namgyal Monastery discreetly that I advised the monks to stop their Dolgyal practice. I did so out of concern for the welfare of the Buddhadharma among Tibetans and for the flourishing of Je Tsongkhapa's tradition. Instead of supporting that tradition practice of Dolgyal has brought about sectarian tension."

Sera Monastery is one of the 4 Great Monasteries of Tibet. Traditionally Sera Mey has 16 houses. Pobhor Khangtsen among 13 houses of the monastery have been re-established in exile. The houses take care of the sheltering and other basic needs of the monk students. Each house has it's own prayer hall, hostel, kitchen. According to the monastery, there are 1755 monks, including the scholars, Tulkus, Senior monks and graduated Geshes across the abroad countries.