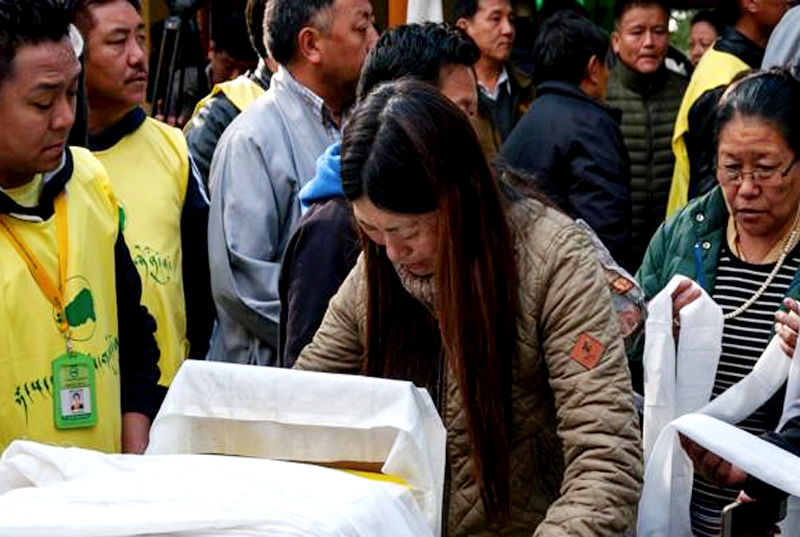 Dharamshala — In an emotional funeral service in Dharamshala, India, on Sunday morning, March 6, 2016, thousands of Tibetans and supporters gathered to remember the 16-year-old Tibetan self-immolator, Dorjee Tsering and recognize his bravery and sacrifice for his country and people.

The area packed with Tibetans and supporters reverberated with solemn prayers as the body of Tsering, wrapped in Tibetan national flag, reached there for the funeral service organised by the Tibetan Youth Congress Sunday morning. The funeral service began with the singing of Tibetan national anthem, followed by grand prayer service at Lhagyalri, near the main temple in Dharamshala.

The crowd was filled with tears from all over the town, brought together by a desire to express solidarity, condolences, show respect, share memories and highlight the need to keep the tragedy from defining the freedom they are fighting for. Both Indian and Tibetan shops and restaurants in McLeod Ganj remained closed as a mark of solidarity and respect.

Sikyong Dr Lobsang Sangay met Tsering's parents on Sunday and expressed his deep sympathy and firm support to the families.

Over five thousands gathered to pay their respect to Tsering when his body reached lower Dharamshala Saturday morning at 8.20 am. Dorjee's body was brought from Safdarjang hospital, Delhi for final rites in Dharamshala. As a mark of solidarity, the crowd then lined up on the roadsides to pay their respect to the casket, which was carried in an ambulance with a banner that reads "A Nation Lost a Hero."

Tsering set himself on fire in Dehradun, Uttarkhand State, India, protesting China's occupation and hard line policies in Tibet. As he burned, "he called out for Tibet's complete independence."

"I have had a strong determination to do something for Tibet since my childhood," a video showed him saying in his hospital bed. "I thought that there was nothing else I could do other than self-immolation, because if there is self-immolation, people get shocked, thinking that he set himself on fire for his country," he went on, speaking through an oxygen mask and with his face swollen. "It seems the oil put on my body was not enough for it to burn completely," he added. He continued, "I want His Holiness the Dalai Lama to live long and for Tibet to achieve its independence."

Tsering's protest coincided with the death of a 18-year-old Tibetan Buddhist monk who set himself on fire near Retsokha monastery in Karze County of Kham Province, eastern Tibet on Monday. Kalsang Wangdu self-immolated on Monday afternoon. He called out for Tibetan independence while he burned and died on the way to a hospital in the provincial capital of Chengdu, sources told the Tibet Post International.

The Central Tibetan Administration also said that a memorial prayer service for the peaceful demonstrators who took part in the protests of 1989 in Tibet will be held on the 8th of March annually.

"A prayer service will be held in Dharamshala, India, on March 8, in remembrance of the sacrifices made by the peaceful Tibetan demonstrators who took part in the protests of 1989 in Tibet," The Department of Religion and Culture of the CTA said in a statement, issued on March 5, 2016.

"Every year on March 8, Central Tibetan Administration organise prayer service to express solidarity and pay respect to the Tibetans who lost their lives during the peaceful demonstrations of 1989," the statement said. It added that "the prayer service will begin from 9am to 10am, at the Tsuklakhang temple in MecLeod Ganj."

"Hundreds of peaceful Tibetan demonstrators were killed after Chinese authorities declared martial law on March 8, 1989 and opened indiscriminate firing," the statement said, adding that "the demonstrations began after a group of monks, nuns, and laypeople took to the streets to commemorate the 30th anniversary of the Tibetan National Uprising Day."

At least 150 Tibetans have self-immolated in protest against the repressive Chinese occupation of Tibet. Of these, 143 did so within Tibet, while the remaining eight were living in exile and of them125 have died, including 124 within Tibet and five abroad.

Tibetan self-immolators have called for freedom of Tibetan people and the return of His Holiness the Dalai Lama to Tibet.

China's invasion of Tibet and its continuous implementation of harsh policies to crackdown the freedom of Tibetans living inside Tibet have triggered Tibetans to resort to more extreme forms of resistance. Most parts of Tibet have suffered severe crackdowns and been under heightened restrictions and controls in the past six decades, that China calls it a "peaceful liberation". But Tibetans describe a systematic repression, excluded from positions of power and imprisoned.