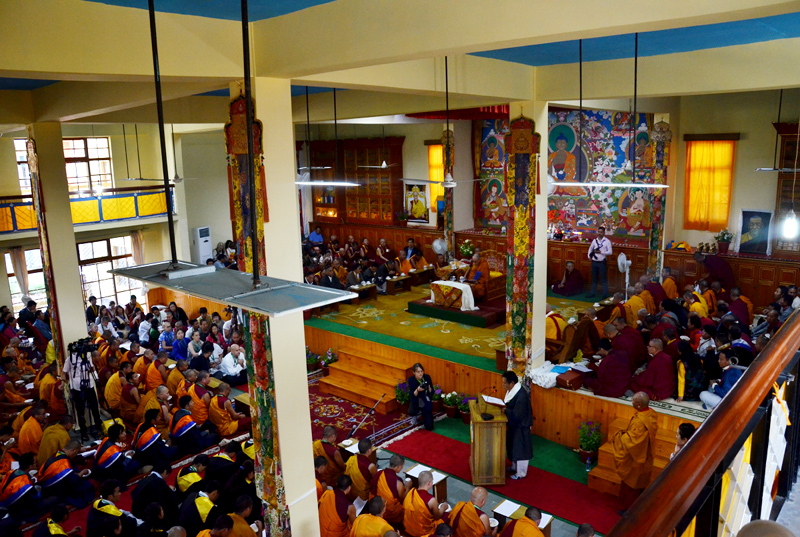 Dharamsala – The morning of April 26th, His Holiness the Dalai Lama, spiritual leader of the Tibetan people, made his way to the College for Higher Tibetan Studies (CHTS) at Sarah, some 12 kms from Dharamshala. His Holiness was met on arrival by Institute of Buddhist Dialectics (IBD) Director, Ven Geshe Kalsang Damdul and Principal of the College, Ven Geshe Jampal Dakpa, who escorted him into the assembly hall.

The ceremony honoring this year's graduates from the college opened with remarks from IBD Director, recalling the founding of the school. Having taken responsibility for preserving and promoting Tibetan culture with the establishment of the Institute, in 1991, he bought land here in Sarah to set up the College for Higher Tibetan Studies. His Holiness blessed the site and inaugurated the institution once it was built. Educational programs include an undergraduate course in Tibetan Studies and graduate courses in Tibetan History and Tibetan Literature as well as an effective teacher training program.

This year's graduates included 14 successful Rimey Geshe candidates, 28 BA and 2 MA candidates. Education Kalon, Ngodup Tsering congratulated all the graduates on their achievements. He described these as going some way toward fulfilling His Holiness's advice to Tibetans to develop real expertise,and compared what they had done to Jetsun Milarepa who told his teacher, Marpa, "I have no wealth to give you, but offer you instead my practice." He added, "We should not be satisfied with what we've achieved so far, but should press on. As they say in English 'the sky's the limit'".

Setting the achievements of the IBD and CHTS in the context of Tibetans' life in exile, His Holiness began his talk by recalling his departure from Lhasa in 1959.

"It was 17th March when we fled Lhasa. I left the Norbulingka at 10 pm. We had to make it past the Chinese garrison and when we left we didn't know if we would see the next day. It wasn't until we reached the top of the Che-la pass that we began to feel out of immediate danger. Local people had brought us horses. We mounted them and then turned to take one last look at Lhasa. Then we left.

"A member of the Indian Cabinet later told me that when the Cabinet received news that I had left Lhasa, the then Defence Minister Krishna Menon expressed the view that the Dalai Lama should not be allowed to enter India for fear of upsetting relations with China. Nehru retorted that that would not be proper, saying, 'We must let him come.'

"Once we reached Lhuntse Dzong we were out of danger, but we still didn't know if we would be able to enter India. We decided that one group of us would approach the Bhutanese border and the other the Indian border. As we reached closer to India we came to know that Indian officials were waiting for us. We also heard that Lhasa was being shelled. We had no idea that we would be in India for decades; we thought we'd soon be going back. We were strangers for whom the only certainty was the sky above and the earth below. We requested the Indian government to help our people.

"I arrived in Mussoorie at the end of April 1959. Shortly afterwards Nehru came to see me. We'd known each other since we first met in Beijing in 1955. However, when I pointed out inconsistencies in what he said he would bang the table in irritation. We discussed not only how Tibetans could make a living, but the setting up of separate settlements and separate schools for Tibetans. Nehru took personal responsibility for seeing that this was done. Since then we Tibetans have kept alive that spirit of needing to survive."

His Holiness said those who have studied the classic texts can share what they know with others with no reference to past or future lives, strictly in the context of this life.

"I've asked the Abbots to pass on this message to others and when I'm in South India in July, we'll discuss it further. By sharing this knowledge we can be of service to others. It seems there are monks at Sera jey who have learned other languages. We also have nuns who are about to become Geshe-mas. And about 50 years ago I urged monks of Namgyal monastery to extend their studies beyond rituals to include the study of Buddhist philosophy through logic and reason. This follows the Buddha's own advice to his followers not to accept what he taught at face value, but to examine and test it as a goldsmith tests gold.

"We need to be 21st century Buddhists. We need to study and understand. If we do this Buddhism will go on for centuries more. We can do this in our own language, which is something to be proud of. Besides this, Tibetans are generally known for being honest, ethical and good mannered. Since IBD and CHTS are contributing to the preservation and promotion of Tibetan culture, there is no limit to the progress we can make. I congratulate those of you who have graduated today.

His Holiness went to highlight the importance of teaching knowledge of mind and emotions in secular schools in order for us all work towards building a peaceful world.

"As I said, I congratulate those who have graduated today, but if your minds are not disciplined, mere knowledge will not be of much help. We need to use our intelligence to extend our basic compassionate nature. Children are good natured and open to others, but as they grow up they pay more attention to secondary differences between themselves and others and their self-centredness grows. On the other hand, with mental training we can help others sincerely and effectively. This gives rise to trust and trust is the basis of friendship, which as human beings is what we all need."