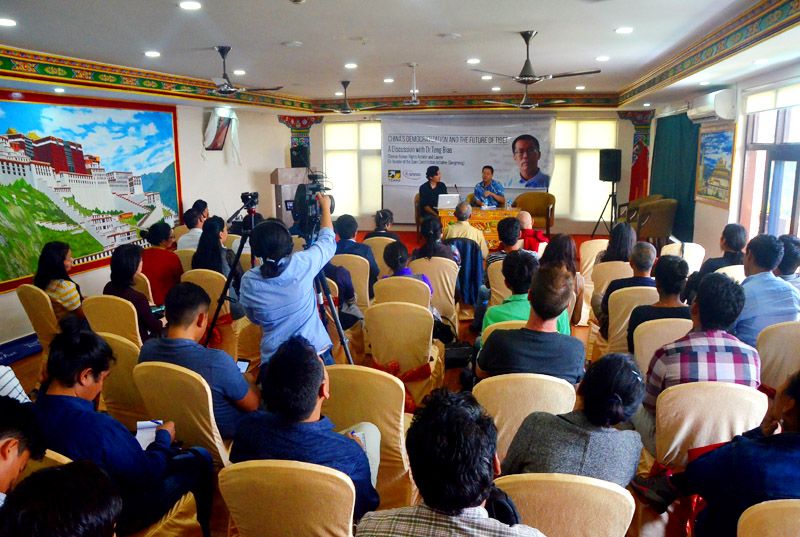 Dharamshala — A discussion with Dr Teng Biao a Chineese Human Rights Activist and Lawyer who is also the Co-Founder of the Open Constitution Initiative(Gongmeng) held on Thursday afternoon in Dharamshala, India, attended by activists, Tibetan officials, Media Persons and Tibetan students. It was jointly organised by the International Tibet Network and Tibetan Centre for Human Rights and Democracy.

The Chinese activist talked of his experience in the past few years where he had himself faced oppression from the government in China for working closely with the Tibetan issues specially after publication of a comprehensive report called the Gongmeng Report of the 2008 uprising, came to their notice; because of this their office was shut down and they were arrested and detained for a month.

Dr Biao was arrested twice once in March 2008 and once again in February 2011. He talked about his experience when he provided counsel in numerous other human rights cases, including those of Rural Rights Advocate Chen Guangcheng, rights defender Hu Jia, the religious freedom case of Falungong, and numerous death penalty cases. He is also the Founder and President of China Against the Death Penalty, Beijing. Till this date he is not allowed to go back to China which speaks volumes about the physical embodiment of the Iron Wall in China.

"Many people have thanked me in the past for my work but, I tell you not to thank me; As we Han Chinese its our duty to take up the responsibility to talk up against the oppression taking place in China. Just because I did not oppress or take anyone's freedom does not mean that I have no responsibility for it." he said at the very starting.

Speaking about censorship, religious freedom and freedom of expression he mentions that while television, news papers and radio are used by the Chinese establishment as mode of propaganda while they are controlled, that was not the case for Internet and hence encouraged the internet media to be more proactive as it is far harder to control and it connects NGO's and activists all over China.

He also spoke about the dearth of Human Rights lawyers in China and mentioned that in his time only 20-30 Human Rights lawyers existed but, even though today after recovery of the legal profession around 700 out of 250,000 lawyers which is minuscule, work for Human Rights most lack the will to take up sensitive cases.

Dr Biao also spoke about the Tiananmen Square massacre and subsequent increase in acts of suppression by the Chinese Communist Party where dissidents were put in prison for peaceful protests while being labelled separatists.

Talking of the need for a democratic setup he mentioned that China's Communist Party has a long standing feud with legitimacy and their attempt to cover it with economic growth. Talking of the eminent crisis going on in China he said that the time is not far when China will go through Economic, Political, Social and Cultural Crisis. He Spoke of the collapse of Communism around the world and the erosion of its values and ideologies in China as we know it today. He gave examples from the Arab Spring and mentioned that even Muslim countries are taking up democracy while discarding their autocratic leaders and hoped that china will one day follow on the same path.

Speaking of the plight of the Tibetan people he stressed the need to give more voice and freedom to the people while making the area more accessible to mainstream media. He spoke about the movements being organised for gender equality, educational rights and anti-corruption drives. He also mentioned how the legal fraternity is controlled by the bar council, judicial Bureau and the government.

On being asked by a member of the audience as to what he thought of the midway approach he mentions that he is a follower of the principles of His Holiness and considers himself an universal citizen hence, he would respect the wishes of the Tibetan people and their choice to follow for autonomy or the midway path should be their own choice.

Speaking on the lacunae of the Chinese Government he mentioned Art 35 of the Chinese Constitution which reads - 'Citizens of the People's Republic of China enjoy freedom of speech, of the press, of assembly, of association, of procession and of demonstration.'
He spoke of the contradictory practices in the policy of the government and there being not holistic education but brainwashing and propaganda for its citizens which leads to majority of them having no access to the true information but being spoon-fed party propaganda to suit the government's motives.

To a question by a reporter of Tibet Post International about the nature of UN General Assembly and UNHRC resolutions and outcome documents that are not binding but only recommendatory in nature and the future of Human Rights to be enforced not only in the case of the Tibetan people but Human rights violations all around the globe which seem to be on a rise and the future of Human Rights he said:

"Today as we see it China is not run as a democracy per se, what we see in the international or even internal spheres is the government's view point; it is not the same as what the Chinese people want. If we follow international occurrences, we will find it siding with Syria and North Korea not because of their ideology or ideals but for strategic advantages. Human Rights in China today is a mere lip service to its international commitments not a loop hole free enforced legal system. Further, we also need to remember that it is a permanent member of the security council which confers to it considerable power. So, if we want a transparent UN system which is just and fair several systematic and operational procedures need to go through reform which in itself wont be easy but has to happen if equality and justice in the true sense are to prevail as only then can human rights be protected on a global scale."