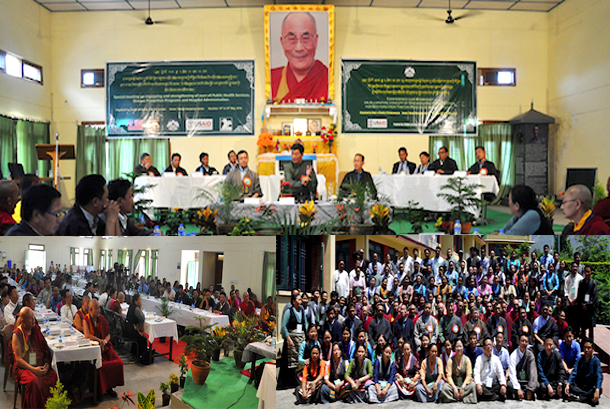 Dharamshala — Speaking to a Tibetan public health meeting in Dharamshala, India, on Monday, May 16, Sikyong Dr Lobsang Sangay said that he informed His Holiness the Dalai Lama about this special meeting in response to His Holiness' recent concern.

Sikyong inaugurated a special meeting organized by the Department of Health, Central Tibetan Administration, which was held at the Tibetan Reception Center from 16 -18 May.

The theme of this special meeting was on the improvement and reinforcement of the overall public health services, disease prevention, and hospital administration of the Tibetan community in exile. Health Kalon Dr Tsering Wangchuk, together with 129 Tibetan doctors, hospital administrators, and health staff from all over India attended the meeting.

According to the CTA media, this meeting was a part of the Kashag's endeavour to improve Tibetan preventive healthcare following His Holiness the Dalai Lama's public criticism on the deteriorating situation of Tibetan public health on 23 March.

In his inaugural remarks, Dr Sangay expressed the aims and objectives of the special meeting. Sikyong also highlighted some urgent areas for improvement. Dr Sangay said, "As invited by the health department, you all are gathered here today to deliberate on how to improve the overall Tibetan healthcare. I hope you will utilize your experience and knowledge of the issue to strengthen Tibetan public health which is the need of the hour."

Sikyong further revealed His Holiness the Dalai Lama's serious concern on Tibetan public health, as he added, "I went to welcome His Holiness the Dalai Lama at Gaggal airport yesterday. At that time, I informed His Holiness about this special meeting. He expressed his appreciation and told me that he noticed lots of chronic patients in the settlements and the monasteries. He said that these are a result of neglect towards preventive healthcare and advised me to work on these issues."

Speaking about the Kashag's emphasis on public welfare and healthcare, Sikyong expressed his promise and determination to improve the poor section of the Tibetan community and develop the Tibetan public health. The three-day meetings have deliberated on seven agendas related to Tibetan public health. A list of proposals was formed regarding the further implement of these agendas. These proposals will be submitted to the Kashag, and further measurement will be taken via the department of health and its branch offices and clinics.