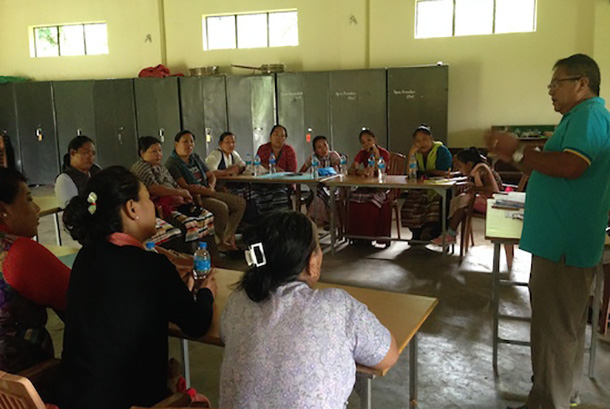 This program which is funded by donor The Swedish Organisation For Individual Relief ( SOIR-IM) aims to empower the economically and socially marginalized groups of women by inculcating the concept of Self-Help Group (SHG).

According to a report by the Tibetan administration, SOIR-IM has been working in India since the 1970s through supporting partners in the form of grass-root NGOs. SOIR-IM has eight partner organizations located in different parts of India.

Mr. Sonam Dhargyal from camp number 3 from Shambala farmer's SHG shared his own experience to the participants in the training. He told the participants that more than the economic benefits SHG build unity among the members who helps each other when faced with difficulties.

Ms Dechen Wangmo, Coordinator, Women's Empowerment Desk with the help of Tibetan settlement office Doeguling worked jointly towards this program. There were 16 women participants in the training who are willing and interested in joining in the SHG program.

Two SHG groups were formed in the last day of the training who will take the responsibility of including more required number of members in their own SHG. These two women's SHGs are Lhamo-Chiphen SHG and Dolma-Chikdril SHG. As per the project these two groups will received seed money of Rupees one Lakh in the name of their SHG to start their own income generating activities and internal-loaning system.

In the coming years Women's Empowerment Desk is looking forward to introduce more number of women's SHG in the other exile Tibetan settlements to help and empower economically marginalized Tibetan women in those areas.