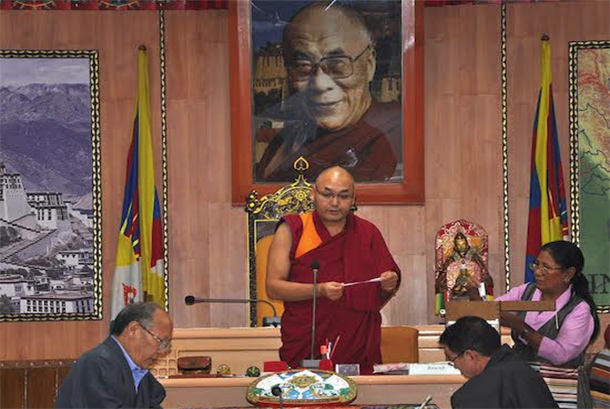 Dharamshala — The 16th Tibetan Parliament in Exile (TPiE) rejected on Saturday nominee for a crucial position of the Kashag (cabinet) as Sikyong tried to complete the formation of a new and inclusive administration.

Dr Lobsang Sangay resubmitted to the parliament the name of former Utsang MP Dhardon Sharling as minister for the Department of Information and International Relations (DIIR), Central Tibetan Administration (CTA) but rejected by the Parliament, in a floor decision held on the fifth day of the second session of 16th TPiE.

As per the rules and regulations of the CTA regarding election of Kalons, if there is even a single objection to a Kalon proposed by Sikyong, a majority vote is required on the floor of the house to deliver a verdict of approval.

Due to objection from two parliamentarians, including Mr Dawa Phunkyi, a floor vote was ruled to deliver a verdict of approval. The Parliament rejected the approval of DIIR Kalon nominee Dhardon by 27 votes to 14 with two abstentions and two absentees out of a total parliament strength of 45.

Dadon was elected as a kalon with 25 votes in the Parliamenthe after the democratically elected political leader of the Tibetan people appointed her to lead one of his departments.

She was removed from her first cabinet post as DIIR Kalon in June, due to not meeting the age qualification. However she's the only woman nominated for a top position in Sikyong's second-term cabinet.

In a Facebook post on Saturday, Dadon said she respects the decision of the Parliament. "Today Honorable Sikyong tabled my nomination for Kalon for the second time. This comes as a huge honor. The fact that I failed to get the majority support in the Parliament is also a democratic process."

"I have always believed that holding a post in the Parliament or in the Cabinet was never a matter of career choice for me. But what remains above all is my lifelong commitment to serve His Holiness the Dalai Lama, the aspirations of Tibetans inside Tibet and the Central Tibetan Administration. These will be the core tenets of my life," she added.

In June this year, the Parliament approved all the seven nominated members of Sikyong's proposed cabinet, after he presented 7 new appointees - six men and one women.

Sikyong now needs to introduce one new face for approval to complete his cabinet but cannot nominate anyone who has already been rejected. Those approved included ministers of Religion and Culture, Home, Finance, Education, and Security.