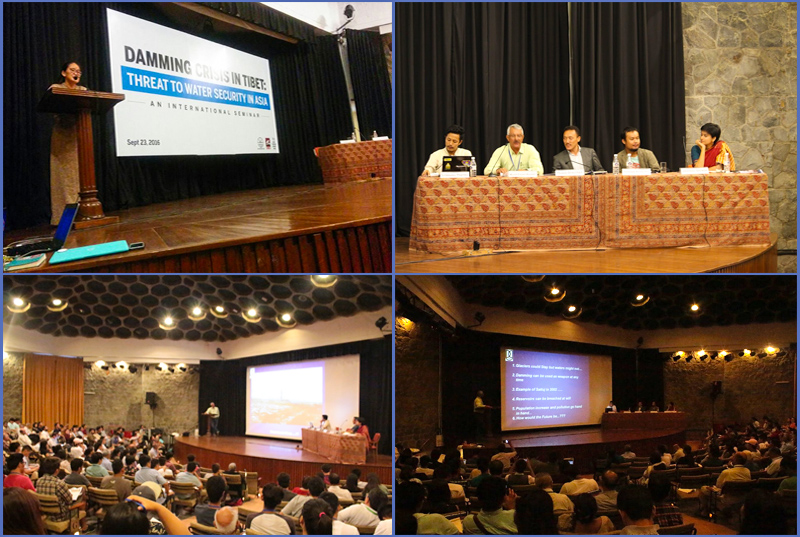 New Delhi — First International Seminar on 'Damming crisis in Tibet: Threat to Water Security In Asia' held in New Delhi, the capital of India, on September 23, 2016.

The seminar is organised by Students for a Free Tibet-India (SFT-India) at India International Center, New Delhi ahead of World Rivers Day. Over 150 Indian and Tibetan students, civil society members, and experts attended the seminar, which is part of SFT India's campaign Tibet's Rivers, Asia's LifeLine.

Over the last decade, Tibetan rivers have witnessed an exponential increase in hydropower projects on their water sources. China's systematic damming of Tibet's rivers and extensive water diversion projects have devastating consequences for Tibet and the nearly 2 billion people in Asia living downstream.

"What we need is more awareness on this looming environmental disaster and trans-boundary mechanisms for accountability on water sharing. With this in mind, we are hosting an International Seminar on the 'Damning Crisis in Tibet' in the lead up to September 25, World Rivers Day to globalize the call for protecting Tibet's river." said Tenzin Tselha, National Director at Students for a Free Tibet India.

"With speakers from Thailand, Bangladesh, India and Tibet at the seminar, we aim to expose China's act of irresponsible and dangerous dam construction and diversion projects", said Lobsang Tseten, Program Director at Students for a Free Tibet-India. "Through this seminar our objective is to form an alliance of students, activists and environment stakeholders from the downstream countries, calling to protect Tibet's rivers".

The group launched the campaign in March 2015 to highlight the damming crisis on Tibet's rivers, with a particular focus on Yarlung Tsangpo/Brahmaputra. Tibet is the source of ten major river systems in Asia; nearly 2 billion people depend on the Tibetan Plateau for their water security. As China builds mega-dams and river diversion projects on Tibet's rivers at an unprecedented rate, it has ignored all consequences of these projects on the nine downstream countries.

SFT works in solidarity with the Tibetan people in their struggle for freedom and independence. They campaign for Tibetans' fundamental right to political freedom, through education, grassroots organizing, and non-violent direct action. Formed in 1994, as a chapter-based network of young people and activists around the world, they empower and train youth as leaders in the worldwide movement for social justice.