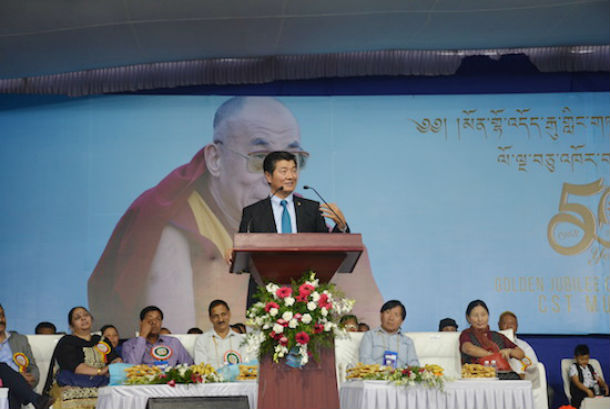 Mundgod — Emphasizing that the Tibetan movement is primarily an Indian movement, Dr Lobsang Sangay, prime minister of the Tibetan government in exile in India, says the Tibetan freedom struggle is alive and Tibetan civilization is strong.

The PM's comments came as he hailed the role of teachers in the advancement of Tibetan culture and movement at a ceremony held to mark the 50th founding year of CST Mundgod on 23 December.

“Our freedom struggle is alive, our civilization is strong, our culture is thriving and international support for Tibet is vibrant and growing, only because of your efforts,” he told a crowd of former teachers and students of the school, according to the Tibetan administration media.

“The role of teachers is significant and valuable for any society but even more for the Tibetan people as they are crucial in educating the youth, who in turn become the leaders of the Tibetan movement,” he said.

Sikyong specially thanked the Indian teachers and staff of the school for their immense contribution towards the success of the school in particular and the growing Tibetan movement in general.

Sikyong also talked about the rich knowledge of ancient India and how the Tibetan people have diligently preserved these treasures after the decline of Nalanda University.

He further spoke about the rebuilding of schools and Tibetan monastic institutes in India after the occupation of Tibet by Chinese forces in 1959.

“With the kind assistance of India and under the visionary leadership of His Holiness the Dalai Lama, Tibetan schools were established in exile to revitalize the Tibetan movement,” he said.

“These schools were mostly taught by Indian teachers who sacrificed a lot for the education of Tibetan youth. Our movement is also based on the concept of non-violence championed by Gandhiji,” Sikyong said, emphasizing that the Tibetan movement is primarily an Indian movement.

The cultural program was held following the official function to celebrate the school’s golden jubilee, which was graced by His Holiness the Dalai Lama in the afternoon.