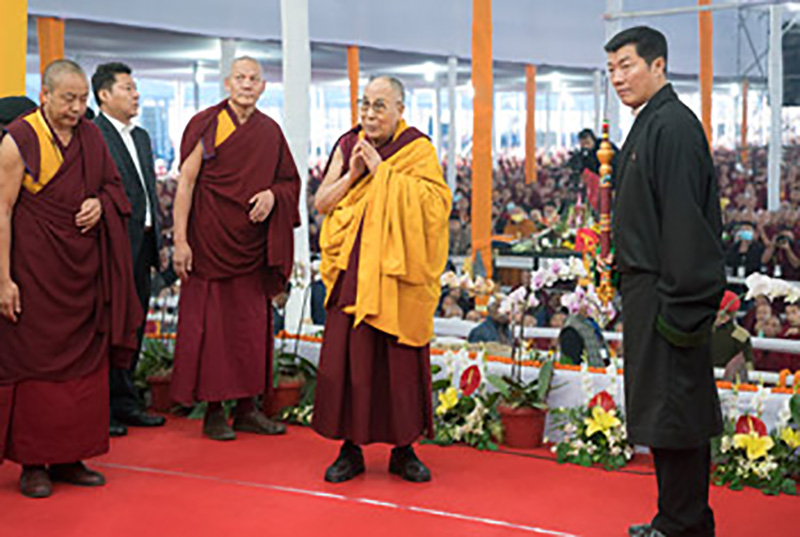 Bodh Gaya — “You are making this Long Life Offering to me and praying ‘May you live 10,000 years’, but we know that’s not possible. However, my dreams and other indications have shown that I could live to be 113. I don’t know about that, but I think I can say I’ll live to be 100. So, be happy, be at ease,” His Holiness the Dalai Lama said after finishing the bestowment of the Kalachakra empowerment to more than 200,000 devotees at the largest international Buddhist religious gathering held in Bodh Gaya, India on January 14th.

Addressing the crowd, His Holiness began, “Usually at the end of a series of teachings like this we do a White Tara Longevity Empowerment, but on this occasion I thought we might do a Chenresig permission from Tagphu Rinpoche’s cycle of visions. It’s called Avalokiteshvara Sarvadugati Parishodana. It’s said that every time you receive this, one rebirth in the lower realms is averted. I received it from my tutors, first from Tagdag Rinpoche and later again, as a result of a dream I had, from Trijang Rinpoche. While I do the preparation, you can recite ‘Manis’.

His Holiness began the permission by performing a ritual to mollify any hindering forces. The Sikyong Dr Lobsang Sangay came forward to offer a mandala, accompanied by his young daughter.

“We’ve been going through teachings for the last few days,” His Holiness observed. “Check your motivation. Don’t let yourself become preoccupied with things of this life or even of the next. Don’t settle for finding peace for yourself alone either. Reflect on the difficulty of finding this human life, how things are impermanent and that cyclic existence is in the nature of suffering. Take refuge in the Three Jewels, develop a determination to be free of cyclic existence, generate bodhichitta and think about how we are beset by wrong views that can be overcome."

“There will be change in Tibet,” His Holiness declared. “Tibetans who came here to attend the Kalachakra Empowerment were called home. Some officials in Tibet referred to the Empowerment as illegal—according to what legal system, I wonder? What they said was just an opinion. Nevertheless, Tibetans were warned that if they didn’t return in time, they would face trouble or their relatives would face penalties. This kind of action contributes nothing to social harmony, it is just disruptive.

“I’m pleased that Tibetans continue to be good hearted and generous. Chinese and other people abroad tell me this is something they admire in Tibetans. It’s something for us to be proud of.

“With regard to inter-religious harmony, instead of focussing so much on being Nyingmas, Sakya, Kagyus or Gelukpas, we should remember that we all follow the same teacher, the Buddha Shakyamuni and that our traditions derive from the 17 Masters of Nalanda.

“Usually there is a point in the ceremony when the Lama accepts the Long Life prayers offered to him. In fact, my prayer every day is to remain as long as space remains and as long as beings remain. In this life, someone who started as a small boy in a remote and secluded part of Amdo has now reached the age of 81 or 82. I can see what benefit I can offer to others. You Tibetans have a link to Chenresig and to me—I will continue to try to do my best to help you.

“I’ve been very moved by the story of the First Dalai Lama, Gendun Drup, who was a great scholar and adept. He lived to a ripe old age and when his disciples told him there was no doubt he would be born in a Pure Land, he told them that was not what he wished at all. He said he wanted to be where there were unprotected sentient beings, and that he’d be there to help them. I have to take rebirth and it would be better to do so in a place where I can serve others.

“You are making this Long Life Offering to me and praying ‘May you live 10,000 years’, but we know that’s not possible. However, my dreams and other indications have shown that I could live to be 113. I don’t know about that, but I think I can say I’ll live to be 100. So, be happy, be at ease.”

Following the Long Life Offering, the last event of the morning was a ceremony to conclude the Kalachakra Empowerment of 2017.

Actor Richard Gere, long-term student of His Holiness's, staunch friend of Tibet and Chairman of the Board of the International Campaign for Tibet was called on to say a few words:

"I don't think there's anyone here who fails to realise what an extraordinary opportunity this is, to be in Bodhgaya to be taking teachings from His Holiness, to be here with him, to spend these last many days with him and to become completely saturated in his kindness, his love and forgiveness. Hopefully we'll all walk away with a little more love, a little more kindness, a little more warmth in our hearts, a little more wisdom, a little more commitment to keep working very hard to transform our minds and our hearts.

"The great Milarepa once said that the real monastery is in our hearts, and the real Dalai Lama is in our hearts. The more time we spend with him, he completely saturates us with his wisdom and his compassion and his love for us.

Sikyong Dr Lobsang Sangay attributed the success of the event to His Holiness's leadership and example. He urged Tibetans in particular to pay close attention to His Holiness's advice, "In this day and age when violence is rife in the world, His Holiness not only preaches non-violence, he puts it into practice. We need to follow his example. May His Holiness soon return to Tibet, may freedom prevail in Tibet. Let us fervently pray that he may yet give the Kalachakra again on the ground in front of the Potala Palace in Lhasa."

In his final remarks of the festival, His Holiness said that after listening to the Chief Minister, he was optimistic about a revival of interest in Buddhism and thanked the organising committee for their excellent preparations and efficient provision of facilities and arrangements. He said everything had gone very smoothly.

“Finally, I’d like to thank all the Indian police and security forces who have worked efficiently to ensure my security during this event, I have particularly valued the fact that so many of them were happy to return my smile. The most important thing that each and every one can do is to cultivate a warm heart, to commit ourselves to developing a sense of bodhichitta and an understanding of emptiness."