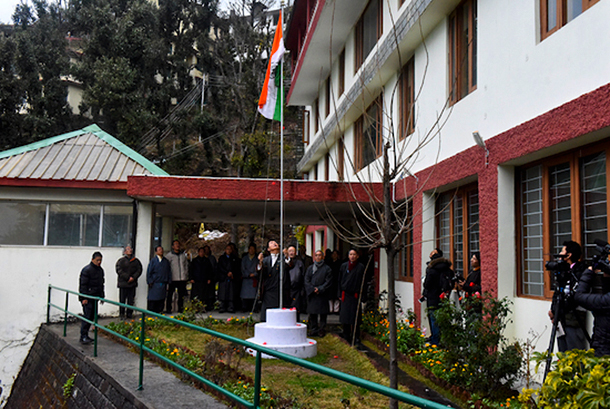 The brief ceremony to celebrate the occasion was held at the Kashag secretariat, attended by Kalons, Secretaries and senior officials of the The Central Tibetan Administration (CTA). Dr Sangay hoisted the Indian National flag at the ceremony held Tuesday morning.

"Tibetans inside and outside Tibet, either in spirit or in person, joins in the celebration to mark the 67th anniversary of India's Republic Day," Sikyong said while greeting the people of India on behalf of the Tibetan people.

"India is also a melting pot of diverse religious beliefs, ethnicity and ideologies. This unique feat is a result of India's deep rooted faith in its democratic values for which it has garnered worldwide respect and admiration," Sikyong added.

Sikyong further expressed gratitude to the people and government of India and said that he is hopeful that the joint development of India's economic and democratic rights will continue even further in times to come.

Following the brief ceremony at Kashag, Sikyong took part in the official ceremony organised by the local Indian administration of Kangra district at the Zilla Parishad hall in lower Dharamshala.

Sikyong was accompanied by Kalon Karma Yeshi and Kalon Phagpa Tsering with Deputy Speaker of Tibetan Parliament Acharya Yeshi Phuntsok at the function. The chief guest at the function was Shri Brij Bihari Lal Butail, Speaker of the Himachal Pradesh Legislative Assembly. The function concluded with cultural performances.

People across India on Thursday celebrated the 68th Republic Day to mark the adoption of its own Constitution on January 26 in 1950, which was the consequence of tireless efforts by the drafting committee headed by Dr Bhim Rao Ambedkar or "Father of Indian Constitution."

The country showcased its military strength, and tableaux representing states put up a show for the audience at Rajpath, New Delhi.

In his message the President Mukherjee hailed India's pluralism and diversity and said that the country has traditionally celebrated the argumentative" Indian; not the "intolerant" Indian.

Prime Minister of the world's largest democracy, Narendra Modi on that special day extended his greetings to the people on the occasion of the 68th Republic Day. PM Modi took to twitter to greet the nation. "RepublicDay greetings to everyone," the PM tweeted.

The annual celebration included floats from the various Indian states and its defense and police forces. These display a rich culture and heritage of India.