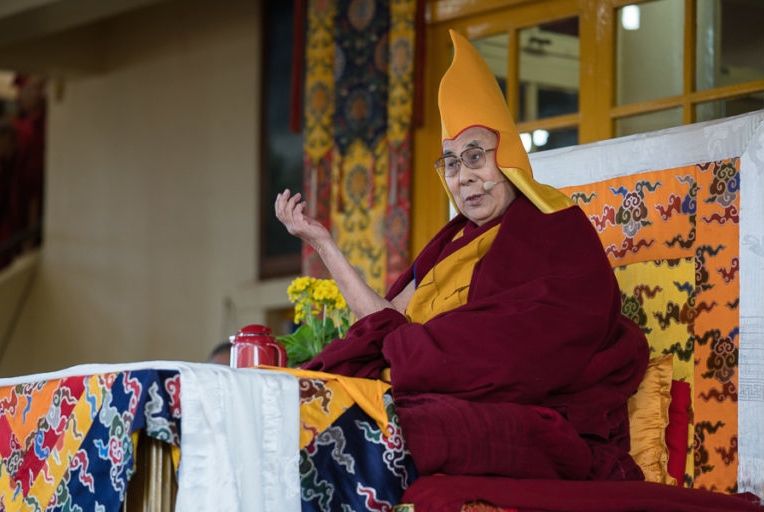 Dharamshala — Greeting an audience of several thousand on Sunday morning, as he ascended the stairs to the main temple, His Holiness the Dalai Lama prepared for the first of his three-day teaching.

His Holiness set the scene for the day’s teaching by explaining that 2600 years ago in India there were many other religious and philosophical traditions. They were all beneficial to their followers in their way, and many continue to be so. Where the Buddha differed from them was in his explanation of the profound view of selflessness—things’ lack of independent existence. He explained that the cause of suffering was that we are all under the sway of disturbing emotions, because we tend to cling to the idea that things have an independent existence.

“We suffer because we create karma,” he said, “and we do that under the influence of disturbing emotions. They in turn are rooted in the ignorance of misconceiving things as independently existent. Look at the tree over there; it seems to be independently existent. But if we look for it among its parts, its trunk, its branches or its leaves, we can’t find the tree. And yet those parts are parts of the tree. Today, even scientists say things don’t have any objective existence. The Buddha taught about reality—how things are.

“However, the Buddha’s explanation of selflessness was not convincing for the teachers of many other traditions. Together they engaged in a contest of miracles. Today commemorates the occasion in Shravasti when the Buddha defeated his opponents in that contest. In the Tibetan tradition, celebrations of this event were introduced by Je Tsongkhapa as part of the Great Prayer Festival. This is counted as one of the four great deeds of his life.

“In Tibet we had the first spread of Buddhist teachings, which fell into decline. The second spread began with Rinchen Zangpo. Atisha was invited to Tibet at this time and he wrote the ‘Lamp for the Path’ there. He established the Kadampa tradition, which consisted of three lineages. Of these the Scriptural Lineage focussed on six texts—the Jataka Tales and the Tibetan equivalent of the Dhammapada, the Udanavarga. Also included were Shantideva’s ‘Guide to the Bodhisattva’s Way of Life’ and ‘Compendium of Training’, Asanga’s ‘Bodhisattva Grounds’ and Maitreya’s ‘Ornament of Sutras’. The Jataka tales recount exemplary deeds of the Buddha in his previous lives as a Bodhisattva.”

Today, His Holiness read the final story in the collection of thirty-four tales. It concerned a time when the Bodhisattva had been born as a woodpecker. One day as he flew he spied an old lion dusty and in distress and felt moved to ask what troubled him. The lion told him he had piece of bone stuck in his throat that he could not dislodge. It was giving him great discomfort and he pleaded with the bird to help him if he could. The woodpecker thought carefully and asked the lion to open his mouth. He placed a stick between his jaws to prevent them closing and flew into the open mouth. Tugging at the bone he managed to remove it and as he flew out kicked the stick out of the way too. In this way the Bodhisattva in the form of a woodpecker relieved the lion of great pain.
Sometime later, conditions were such that the woodpecker had been unable to find enough to eat and was wracked with hunger. He came across the same lion eating a fresh kill and paced up and down hoping to be offered a share. When that was ineffective he asked the lion to let him eat too. The lion roared and refused, teaching the bird that there are beings who will accept help only to give nothing in return.

Having reached the end of the text, His Holiness followed tradition and, turning back to the beginning, read a little from the first tale in the collection. He mentioned that the author, Aryashura, had been a skilful nonBuddhist debater who challenged the monks of Nalanda. Concerned that he might defeat them they called on Nagarjuna to help. He deputed his disciple Aryadeva in his stead. Aryashura was duly defeated and became Aryadeva’s disciple.

Concluding the days teaching, His Holiness announced that he would continue his teaching tomorrow with ‘Stages of Meditation’ and ‘37 Practices of a Bodhisattva.’