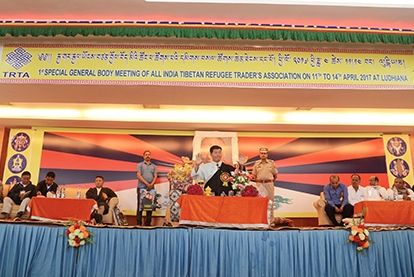 On April 6, Sikyong Dr Lobsang Sangay along with Kalon for Department of Finance announced the ‘Tibetan Hosiery Traders Loan- 2017.’

Sikyong said the pilot loan scheme is aimed at providing relief to the seasonal Tibetan hosiery and sweater traders, who make up about 45% of the Tibetans living in India and is targeted at small-scale sweater sellers needing financial assistance.

Sikyong further said, “the 100 million loan would be disbursed to 100 sweater associations for a fixed period of six-months with a relatively low interest rate of 3% and failure to return the loan would engender the incurring of a much higher interest rate.”

Speaking at the conference Sikyong said, “the socio-economic empowerment initiatives of CTA fit under the framework of Kashag’s five-fifty vision that foresees strengthening and sustaining Central Tibetan Administation and achieving a self-reliant exile Tibetan community.”

The 100 million loan scheme is primarily funded by USAID, which contributed 800 Lakhs while the remaining 200 Lakhs were raised by the Department of Finance.