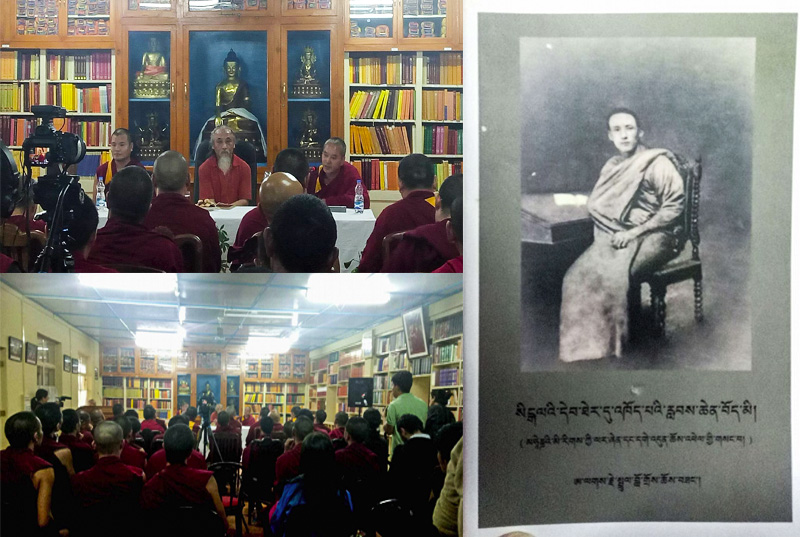 Dharamshala — A history book titled The Greatest Tibetan in Sinhalese History, was launched in the library of Kirti Monastery on the 30th of June, remembering the life of S. Mahinda Thero, a Tibetan monk who is referred to as the ‘savior of the Sinhalese language and restorer of Buddhism in Sri Lanka.’

The author of the book, Alak Jaytul Lodoe Choesang, in his introductory speech of the book said, “A country having a great and highly educated person does more help to the nation as a whole than to the individual himself. These great personalities make the country able to walk shoulder to shoulder with the rest of the world. So I wrote this book considering the importance for the youngsters to have knowledge about them.”

“Most of the younger Tibetan generations do not know about S. Mahinda or have heard of him or his works. My main objective for writing this book was to raise awareness about him and bring his works to our community,”

He then spoke a little about the book, saying, “this book consists of the reasons why Gelong Penpa Dhondup (also known as S. Mahinda Thero) visited Srilanka , his contributions, and the immense service it has provided to the Tibetan people as a whole.”

Ven. Kunchok Gyaltsen who has already read the book, said he appreciated how, “like our own decline of Buddhism that happened in Tibetan history, the book mentions a great downfall of Buddhism in Sri Lanka, that was perhaps even worse than ours.”

According to the author, the writing and research for the book took around a year and 10 months to complete, which all began from his trip to Sri Lanka where he discovered the no-so-familiar personality.