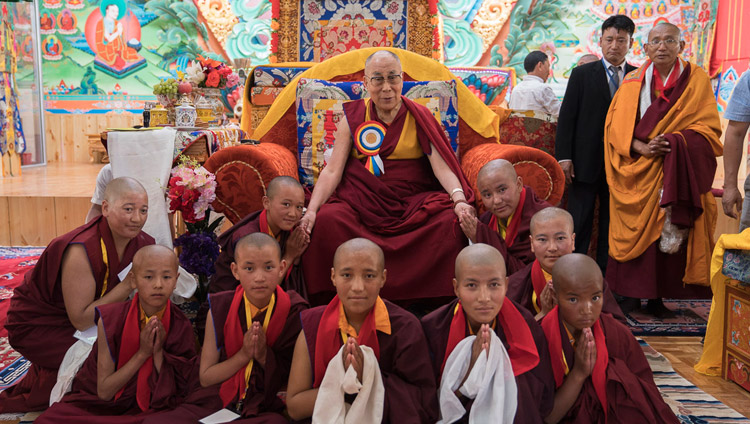 Dharamshala — His Holiness the Dalai Lama graced the inauguration of Dudjum Nunnery in Upper Shey on July 26, and as usual, all of the locals and hundreds of school children lined the road side to get a glimpse of him. He was welcomed by Urgyen Rinpoche as he stepped out of the car.

At the threshold of the Nunnery’s new temple, His Holiness cut the ribbon, recited prayers of consecration and pushed open the doors indicating the temple’s inauguration.

In his introductory speech, Khenpo Tsewang Rinzin described Urgyen Rinpoche’s efforts over many years to uphold the teachings of the Buddha, among which were the founding of this nunnery and construction of this assembly hall that were now complete. Expressing deep appreciation of His Holiness’s presence, he said that since His Holiness embodies the enlightened deeds of his predecessors, even to hear his name leaves a special imprint for enlightenment.

Urgyen Rinpoche referred to “this excellent occasion when His Holiness has graciously acceded to our request and come here in a kindness that cannot be repaid”. He mentioned that 52 nuns presently belonging to the Nunnery, of whom the younger ones attend school and college, while the older ones remain in the Nunnery to do spiritual practice. Rinpoche said that his prime intention is to take care of the nuns’ education and health, in the hope, despite limited resources of serving the Dharma and sentient beings. He concluded with prayers for His Holiness’s long life.

Nuns, four challenging and four responding, then gave a debate presentation before His Holiness the Dalai Lama, discussing synonyms of existence.

“Here in Shey, Urgyen Rinpoche has worked hard,” His Holiness commented as he addressed the congregation. “Not only has he constructed this temple, but he is making provision for the education of these nuns. He has made efforts and local people, supporting him out of devotion, have contributed their help. I really appreciate all that’s been done here, which has also included saving the lives of animals. This is in contrast to the great tragedy and obstruction of the teachings of the Buddha that has taken place in Tibet. We all follow the same tradition, but merely praying that the teachings flourish will not achieve that goal.

“To ensure that, we have to know what the teachings are about. The great Indian master Vasubandhu advised that the teachings of the Buddha can be classed as scriptural and experiential. To keep them alive we need both to study and develop experience of them. This means reading the scriptures and applying what we learn by exercising the Three Trainings in ethics, concentration and wisdom—in other words, study and practice. Here in this Nunnery we have nuns keeping their vows, as well as studying logic and debate. The overall purpose of combating negative emotions cannot be done by prayer alone; it requires understanding and wisdom.

“This is why it’s important for the nuns here to include logic in their studies. Chinese communists used to say that Buddhism is just a system of blind faith. They dismissed it as a means of exploiting the people. However, if you study and develop a sound understanding of what Buddhism is really about, you’ll be able to explain it and answer such challenges.”

He advised Urgyen Rinpoche of the need to give the nuns a good grounding in the fundamental teachings of the Buddha. On the basis of that they could turn to Longchenpa’s ‘Trilogy on Finding Comfort and Ease’, followed by his ‘Treasury of Philosophical Tenets’, which will introduce them to different points of view. To that they can add Longchenpa’s ‘Treasury of the Mahayana’ and ‘Treasury of Dharmdhatu’. He picked up the small booklet that had been distributed containing the ‘Heart Sutra’ or ‘Perfection of Wisdom in 25 Lines’ and gave a succinct explanation of its contents.

Turning to the nuns, he said, “Study well and you too can become fully qualified teachers. Last December in South India, twenty nuns were awarded Geshe-ma degrees in recognition of their rigorous studies over about twenty years.”