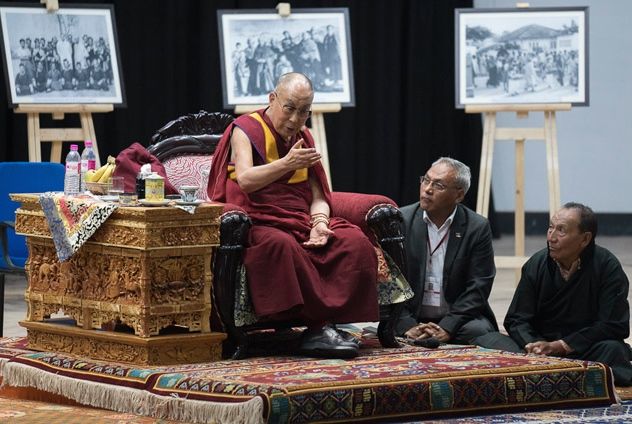 Ladakh — Tibetan spiritual leader His Holiness the Dalai Lama attended a seminar on communal harmony and world peace today, July 28th, at the Central Institute of Buddhist Studies in Ladakh, an event in accordance with the centenary of the birth of the great 20th century leader of Ladakh, Bakula Rinpoche.

When it came to His Holiness’s turn to speak, he addressed the gathering as brothers and sisters, telling them what an honor it was for him to be among them once more. He remarked that on his first visit to Ladakh in the 1960s he had met Bakula Rinpoche and many old friends, most of whom were no longer there. At that time Ladakh had not made much material progress. Since then, it has been transformed, with Bakula Rinpoche and others like Sonam Norbu having made a significant contribution.

“It’s very good to remember what a difference he made here,” His Holiness continued. “In due course, Rinpoche also played a significant role in the development of Mongolia and the restoration of Buddhism there, especially in terms of discipline.

“However, what’s past is past and now we have to look to the future. Generally, across the world, the beginning of the 21st century has been better than the 20th century. People have become fed up with violence and nurture a genuine desire for peace. I greatly appreciate the spirit of the European Union. At the end of the Second World War, the nations of Europe, after fighting each other for centuries, decided instead to work together for the common good. For sixty years since then peace has prevailed.

“One of the big mistakes of the 20th century was the persistent attempt to solve problems by use of force. The world has become so interdependent, both in terms of our economies on the one hand and dealing with challenges like climate change that affect us all on the other, that such an approach is completely out of date. We need a new way of thinking to suit our new reality. We have to learn to live side by side.

“We all want to live a happy life, so we have to learn to live together in trust and mutual respect. We do have differences of race, nationality, religious faith and so on, but these differences are secondary in comparison to our equality in being human. When I heard scientists say they had evidence that basic human nature is compassionate, I thought, ‘There’s real hope.’

“Helping others brings deep satisfaction. No matter how powerful we may seem to be, our survival depends on the community. Clearly the community is crucial to individual happiness, so if we make others happy, we too derive benefit. We need to take action. However, if we act out of self-centredness, it will be difficult to be transparent, to earn others’ trust and friendship. By learning to be more warm-hearted we can create a more compassionate world. As members of Institutions like this you can make a difference here in Ladakh, in Jammu & Kashmir and in India at large.

“We face a multitude of problems. But among them conflict in the name of religion is unthinkable and shameful. Such narrow-minded, short-sighted thinking is out of step with the times. We have to work with the welfare of the whole of humanity in mind.

“These are the sort of things I talk about wherever I go. As a Buddhist I pray every day for the happiness of all sentient beings, but those on other planets or in other parts of the universe I can’t reach. Even on this planet there are countless animals, birds and insects that we can do little for. Those who we can really help are our 7 billion fellow human beings, who can gain from learning the importance of inner peace. That’s what I wanted to share with you—now I’d like to hear your questions.”

The organizers had gathered more than 50 written questions, which the presenters read out, asking those who had asked them to stand to identify themselves.

Asked the meaning of unity in religion, His Holiness answered, “The sense of being brothers and sisters.” A question about whether there should be just one religion brought a swift response—“Impossible; even within Buddhism there are different points of view. All major religions convey a common message of love, but we need the variety they represent.”

A questioner noted that while religions invariably advocate harmony, the existence of faith schools seems to contradict that. His Holiness asserted his belief that education should be secular. It ought to be possible to learn to be a good human being, to be warm-hearted, without necessarily touching religion. He said we can find justification for warm-heartedness in scientific findings and common sense.

Asked why people trust him, His Holiness laughed and said it was because of his smile. “I always think of myself and others as being just human beings. I find it’s a basis for easily making friends.”

“The way Ladakh has developed since I first came here is impressive, but it would be good, at the same time, not to lose sight of the need for inner development in accordance with the ancient Indian knowledge of the workings of the mind and emotions—now let’s eat!” His Holiness finished.

Tomorrow, he will begin three days of teaching Shantideva’s ‘Guide to the Bodhisattva’s Way of Life’.