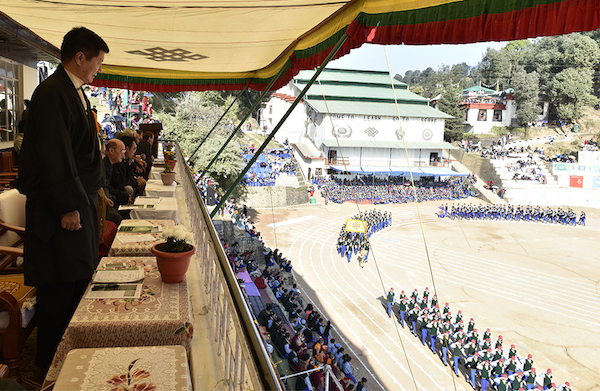 Chief guests included President Dr Lobsang Sangay and Khenpo Sonam Tenphel, Speaker of the Tibetan Parliament-in-Exile, while others in attendance included members of the 15th Kashag, members of the standing committee of the Tibetan Parliament, Tibetan Justice Commissioners, heads of Tibetan governmental and non-governmental organisations, recipients of TCV 20 Years Service Award, TCV Alumni class of 1992, and long time donors. Thousands of Tibetans and supporters also joined in the celebration.

Calling the theme as the need of the hour, Sikyong reminded how leaders such as Moa Zedong, Adolf Hitler, Benito Mussolini and Osama Bin Laden despite having modern education brought more sorrow then peace to the world. According to him it is because of lack compassion for others.

The Tibetan President also called for an end to regionalism, stressing the need for unity, saying, “Teachers and staff have the added responsibility of teaching the importance of unity. It is of great importance for them to advise the students to act without being biased towards a particular region or a sect."

“As per the aspiration of His Holiness the Dalai Lama and the vision of the Central Tibetan Administration, TCV has been serving the Tibetan community by providing quality education to Tibetan children for over five decades now. For that, I sincerely applaud and thank the school for its distinguished record,” he added.

The celebration was marked with cultural performances and an impressive calisthenics display, all performed by students.

TCV is the largest residential school of the exiled Tibetan community. It was founded in 1960 as a nursery with 51 children. TCV has become an integrated educational community for Tibetan children in exile, as well as for hundreds of those escaping from Tibet each year. With established branches in India extending from Ladakh in the North to Bylakuppe in the South, TCV has over 15,000 children under its care. It is a registered, nonprofit charitable organisation with headquarter based at Dharamshala in Himachal Pradesh, North India.