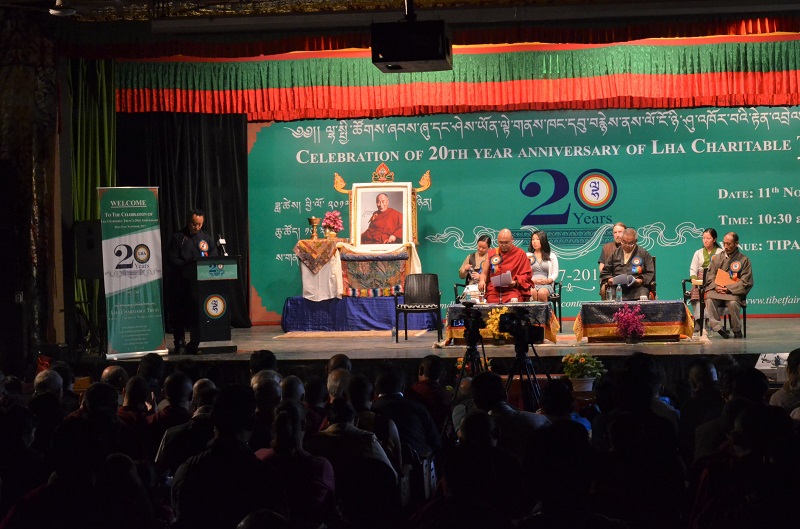 Dharamshala — LHA Charitable Trust, the NGO located in Mcleod Ganj which has served over 12,000 students and had contributions from more than 7,000 volunteers, celebrated its 20th anniversary at the Tibetan Institute of Performing Arts on Saturday, November 11th, gaining praise from throughout the community.

Dharamshala — LHA Charitable Trust, the NGO located in Mcleod Ganj which has served over 12,000 students and had contributions from more than 7,000 volunteers, celebrated its 20th anniversary at the Tibetan Institute of Performing Arts on Saturday, November 11th, gaining praise from throughout the community.

“Since arriving in exile the need to know other languages have been felt by many, especially those who newly arrive from Tibet. We teach Tibetan, English, Chinese, French, German, and Japanese etc. Many Tibetans migrate to France and Germany, and learning the languages here gives them a head start,” said the Director.

Since its inception in 1997, the organization had around 12,000 students and over 7,000 volunteers associated with them. Besides the international language classes, the organization also provides free meal through its soup kitchen and clean water to various institutions through the Clean Water Project.

Tibetan spiritual leader His Holiness the Dalai Lama wrote a message congratulating the organization dated October 9, in which he expressed his joy over LHA turning 20 and his profound gratitude towards everyone associated with it. The spiritual leader commended the organization, saying, "LHA has been playing a leading role in this movement and is complementing the efforts of the Tibetan leadership. Today, it has become one of the important NGOs serving the Tibetan community, young and old.

“The organization is well conceived and its programs well implemented. Its multifaceted programs aims at preservation and promotion of Tibetan language, cultural heritage, and provision of educational resources to the community,” His Holiness said, adding that its cultural exchange programs, volunteering opportunities has enabled a platform to spread awareness on Tibet.

Speaker Khenpo Sonam Tenphel congratulating the organization said that the public must too instill the aims of organization in their daily lives and support the organization in their various social works. “I commend LHA for your genuine determination in preserving and promoting Tibetan language and cultural heritage as well as creating awareness on Tibet’s issue for the people all around the globe,” said the Speaker.

"Lha's conversation class was a great opportunity to practice using English with native English speakers, but also gave me the opportunity to meet people from all over the world, which helped me learn to listen and understand different accents and way of speech, an opportunity I had never gotten without LHA," said Dukar, a former student in an interview with TPI.