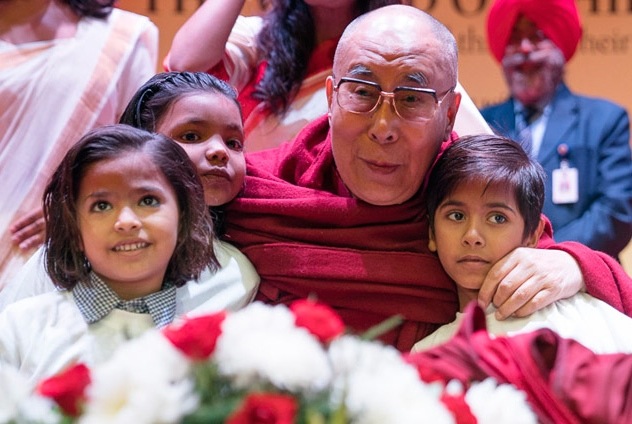 Dharamshala — “Education has expanded and improved in this country, and yet there remains a huge gap between rich and poor. And the poor get left behind. It is essential that they are able to build self-confidence," said His Holiness the Dalai Lama on November 18 during a public engagement at the Smile Foundation in Delhi.

Dharamshala — “Education has expanded and improved in this country, and yet there remains a huge gap between rich and poor. And the poor get left behind. It is essential that they are able to build self-confidence," said His Holiness the Dalai Lama on November 18 during a public engagement at the Smile Foundation in Delhi.

His Holiness the Dalai Lama arrived in Delhi on November 17th, where he graced two public event before continuing on his three-city tour of Delhi, Bhubaneswar, and Kolkata.

Arriving at the Salwan Public School in Rajinder Naga on November 18, the spiritual leader was welcomed by the Chairman of the Governors, Kirpal Singh, who described His Holiness as an apostle of peace, a symbol of love and compassion, a global spiritual leader, and an enthusiastic advocate of democracy. He advised the students to listen carefully, because he predicted that this opportunity to listen to him would in future be etched in their memories. Finally, on behalf of the students, teachers, staff and students’ parents he extended a warm welcome to His Holiness almost exactly 20 years since his last visit on 16 November 1997.

“Respected elder brothers and sisters,” His Holiness began, as he saluted the teachers, staff and parents, before greeting the students, “and younger brothers and sisters, I am extremely happy and honoured to be with you once more and able to engage with all these young people. I belong to the 20th century and my parents, my teachers and many of my friends have already gone. But when I meet young people like you, I feel younger again too. There are still eight decades of this century yet to come. Those of you who belong to the 21st century have the opportunity—and responsibility— to create a better, more peaceful, compassionate world. Many of my generation will not live to see it, but we place our hopes in you.

“Our world has become deeply interdependent. We used to think only of ‘my family’ and ‘my country’, but now we have to extend our concern to the whole world and the 7 billion human beings alive today. If we can all live together in peace and harmony, we will all benefit. We must employ universal values on a global level. Otherwise, simple self-centredness will bring anxiety and stress, which in turn leads to mistrust and even violence. As social animals what we need are friends. When we are surrounded by friends we feel safe and secure. Therefore, it makes sense to extend our concern to the welfare of others in the context of the oneness of all 7 billion human beings."

He went on to explain that he is also committed to fostering inter-religious harmony and he takes great encouragement from India’s being a place where all major religions live together in harmony. Home-grown traditions like the Samkhyas, Buddhism, Jainism, the varieties of Hinduism and Sikhism flourish alongside traditions from abroad—Zoroastrianism, Judaism, Christianity and Islam. In her harmonious diversity India sets an example to the rest of the world.

“Tibetans have historically regarded Indians as their gurus and themselves as chelas or students,” His Holiness explained. “But while much of the knowledge that was imparted more than a thousand years ago has been neglected in its country of origin, Tibetans have kept it alive. Consequently we have proved ourselves to be reliable chelas.

The following day, the 82 year old Nobel Laureate graced the NCUI Auditorium in South Delhi for an event with The Smile Foundation. Founder and Chairman of the Smile Foundation, Santanu Mishra welcomed the spiritual leader.

In a short introduction to Smile Foundation, Santanu Mishra thanked His Holiness and everyone in the audience for their presence. He expressed the hope that His Holiness’s words would be a life-long inspiration to the children listening to him. He explained that the Smile Foundation’s goal is the uplift and empowerment of underprivileged children, youth and women.

“I want to share a couple of stories with you,” His Holiness told the audience. “Not long ago a family from Bombay came to see me seeking my blessings. I told them, I have nothing by way of blessings to give you, but it seems that you are quite well-off, so the real source of blessings is already with you. If you were to use some of your wealth to help children from the Bombay slums, by providing them with opportunities and facilities for education, that would attract real blessings to you.

“On another occasion, some students attending a prestigious institution asked what they could do to help. Again I suggested they seek out the poorer children where they live and contribute directly to their education. I encouraged them to try to help those especially who had no other help.

“Since Independence, education has expanded and improved in this country, and yet there remains a huge gap between rich and poor. And the poor get left behind. It is essential that they are able to build self-confidence.

“Once in South Africa I visited a family in Soweto. I congratulated them on South Africa’s new-found democracy and urged them to look forward to the day when black and white Africans would be equal. One of them shook his head and told me it wouldn’t happen because black brains are inferior to white ones. I was shocked and remonstrated with him that no brain expert would agree that there was any such difference between the brains of black and white people or their potential. Eventually, after much persuasion, he conceded with a sigh.

“In Tibet too, there have been Chinese hard-liners who assert that Tibetans are similarly inferior to Chinese. The reality is, however, that given the opportunity, Tibetans are quite as capable of excelling in their studies as their Chinese counterparts.”

His Holiness reiterated his view that to address the gap between rich and poor, it’s important for those with wealth to provide education facilities. But it is also important that the poor work hard and exert themselves to bolster their self-confidence. He stressed that here in India this particularly applies to those who belong to the so-called ‘lower castes’. He reminded his listeners that the 7 billion human beings alive today are physically, mentally and emotionally the same—they are equal in being human.

“The Smile Foundation is already making effective progress in providing education facilities for the underprivileged. I really appreciate your work. So I have decided to contribute to supporting it over the next five years. When I see reports of children neglected and starving in different parts of the world I feel like crying because there seems so little I can do to help. Supporting your foundation as you help children is something I can do."

His Holiness remarked that generally modern education is focused on material goals without looking within. However, he is of the opinion that India is the one place where it may be possible to augment this approach to education by combining it with ancient Indian understanding of the workings of the mind and emotions to achieve peace of mind.

“I have a vision,” he said, “but I only have one pair of hands with which to implement it. I consider organizations like yours, already working to enhance education, as like further pairs of hands to fulfill the goal. Time moves on. The past is past and we can’t change it. We can only learn from it. Nevertheless, we can change the future and I believe that if steps are taken now it will be possible eventually to make this a more compassionate, peaceful, happier century than the one that went before.”

“When you have peace of mind, it’s easier to cope with problems,” was His Holiness’s concluding advice. “Real change will come about not as a result of prayer, but of using intelligence and taking action.”

Concluding the event, His Holiness posed for photographs with teachers and staff of the Smile Foundation and then with groups of children from seven Delhi schools in the audience.

The Smile Foundation is an NGO whose aim is to empower underprivileged children, youth and women through relevant education, innovative healthcare and market-focused livelihood programs. It is directly benefiting 400,000 underprivileged children and families every year through 200 projects affecting 950 remote villages and slums across 25 states of India.