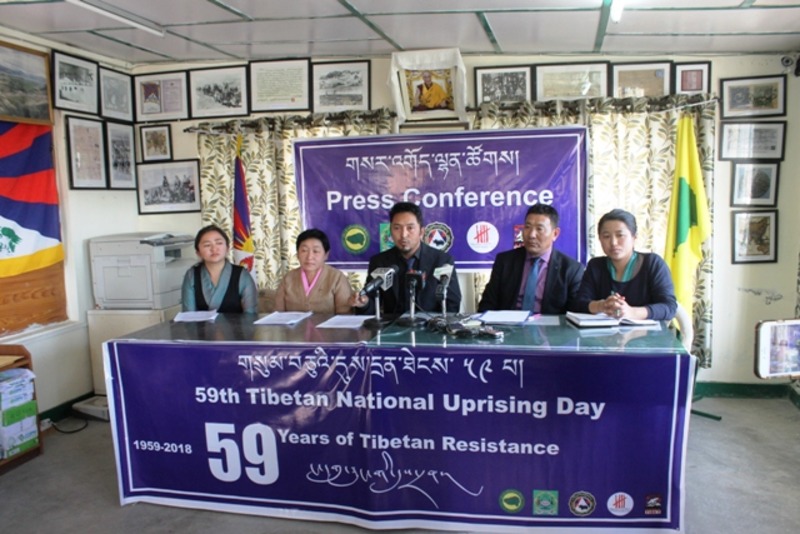 Dharamshala — Leading up to the 59th anniversary of Tibetan Uprising Day celebrated on March 10, five Dharamshala-based Tibetan NGOs have called on the international community and the UN to take action in Tibet.

“We call upon the governments around the world, the United Nations and the international human rights organizations to hold China accountable for the rapidly declining situation in Tibet and express strong public condemnation towards China’s poor Implementation of Universal Declaration of human rights,” the five organizations said in its statement.

The press release read, "Today marks the 59th anniversary of the Tibetan National Uprising. It has been 59 years since hundreds of thousands of Tibetans rose up in a spontaneous grassroots protest demanding the end to China’s illegal occupation of Tibet. China’s use of extreme force to quell these protests compelled the 14th Dalai Lama to escape to India, where he has lived in exile ever since.

"Today also marks the ten years of people’s uprising inside Tibet in 2008, During that time Tibet witnessed a transformation in the strength and breadth of Tibetan non-violent resistance; Tibetans from all walks of life and from all over Tibet took to the streets in large numbers to call for an end to China’s rule.

"Despite the harsh crackdown and the threat of arrest, disappearance, torture and death, China has failed to crush Tibetan resistance; it remains exceptionally strong to this very day. Tibetans in Tibet are finding ways to non-violently stand up to and reject China’s rule through cultural resistance actions, assertions of national identity, and non-cooperation.

"We mark this day each year to show solidarity with Tibetans inside Tibet and to honor and support the brave resistance to China’s rule that continues to this day."

In 2008, protests spread across all of Tibet, the largest protests against Chinese rule in Tibet since the original occupation in 1959. The 2008 uprising was led by over 400 monks of Drepung Loseling Monastery, who marched the streets of Lhasa and subsequent protests had spread throughout the country by March 14.

“The uprising was met with a brutal crackdown; peaceful protestors were fired upon, killing at least 225, more than 6800 arrests and sentencing of about 510 Tibetans. On the ground level, death, arrests and enforced disappearances of Tibetan peaceful protestors are far greater in number than internationally reported,” the statement read.

The five-day plan will begin with a procession from the main temple in Mcleod Ganj to lower Dharamshala on March 10 to commemorate the Tibetan Uprising Day.