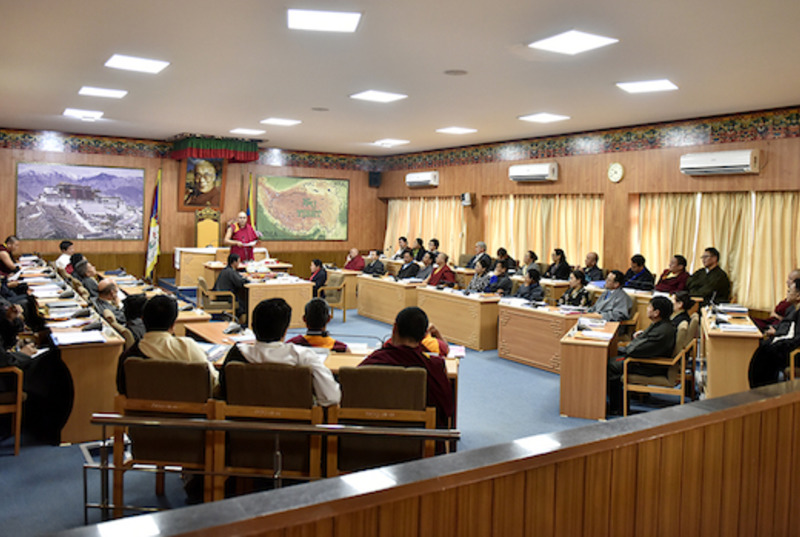 Dharamshala — The Tibetan Parliament in Exile concluded its most recent session with a successful decision for the 2018-2019 budget on March 24, 2018.

The session approved a consolidated budget of INR 2,65,25,55,781.00 for the fiscal year 2018- 2019 for the activities and functions of the CTA’s seven departments, autonomous bodies and offices of the Central Tibetan Administration.

The 11 day session saw intense discussions on the Tibet situation and current protests. In his closing remarks for the session, Parliament Speaker Khenpo Sonam Tenphel took the opportunity to speak on unity.

Speaker Khenpo Sonam Tenphel further urged the Kashag, as the executive authority, to work strenuously towards resolving the Tibet issue, securing the welfare of the Tibetan exile community, and preservation of Tibetan environment and culture. He particularly highlighted the changing global political scenario – as acknowledged by CTA President Dr Lobsang Sangay in his remarks – and said that we should be alert to grab the opportunities to amplify the Tibetan movement and face the challenges that could arise from these global trends.

Speaker also highlighted the immense sacrifices and contributions of His Holiness the Dalai Lama to the Tibetan cause and said that whatever activities that we, the leadership as well as the general public, undertake, we should always feel a sense of gratitude to His Holiness the Dalai Lama and follow his guidance to fulfill his sacred aspirations.

Speaker Khenpo Sonam Tenphel expressed the Tibetan Parliament’s congratulations to Dr Yeshi Dhonden, a Tibetan medical doctor, and Jetsun Pema, sister of His Holiness the Dalai Lama, who have been honoured by the Indian government recently for their service to the general public through medicine and education respectively.

Besides the budget proposal, the Parliament passed three resolutions of mourning, one resolution of solidarity, amended one legislation and also approved Dr Pema Yangchen as Kalon of the 15th Kashag following nomination by CTA President Dr Lobsang Sangay.