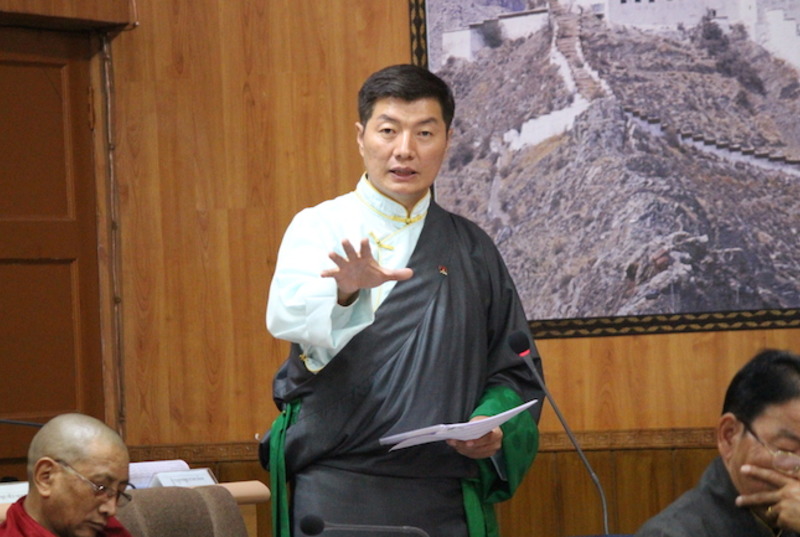 Dharamshala — "It sends a political message. The bipartisan support of US Congress for Tibetans is a great honor and matter of pride for us,” said President Dr Lobsang Sangay of the US Congress's approved multimillion dollar support of Tibetan communities during the fifth session of Parliament.

In his remarks during the fifth session of the 16th Tibetan Parliament-in-Exile, President Sikyong Dr Lobsang Sangay spoke on history, internationalism and Tibet's place in the world.

Responding to the questions raised during the proceedings, the President of Central Tibetan Administration spoke on the awareness and support from the international community towards the issue of Tibet in 1990’s. Dr Sangay credited the recognition of the Tibet cause to the prevalent world ideology of liberalism and internationalism, saying “And because Tibet cause is deeply rooted in the principle of freedom and democracy, it was in sync with the prevalent ideology of that time,” he added.

However, he added that since the last 10 years liberalism and internationalism is being challenged by nationalism and extremism. “In this clash of ideologies in the present world, which course should Tibet take? Such questions need to be pondered upon." Dr Sangay also stressed that extremism is not an option for Tibet and its freedom struggle that has so religiously treaded a peaceful, non-violent trajectory.

Given the rise of China and its relentless pursuit of “socialism with Chinese characteristics” and economic strategies such as the Belt and Road initiative, Dr Sangay said that there has been a growing discourse on China. Citing recent events such as the President Trump’s decision to impose heavy tariffs on imports of steel and aluminium, US and EU’s denial of Market Economy Status to China last year and discourses on China’s influence in Australia, Dr Sangay spoke of how the rise of China is being cautiously gauged by global powers.

"There is a growing speculation over shift in power from the west to the east, and there is the possibility of a war in Asia in the coming five to ten years in which China will be the key player. This speculation, is based on the fact that many countries in Asia are on the path to seeing an economic boom accompanied by proliferation in arms purchase in Asia," the President said.

Dr Sangay also spoke about China’s Tibet policy and how it is seeking to exponentially increase the influx of Chinese population in and around Lhasa in the coming 50 years. “A recent report on China stated that China’s expenditure on domestic security surpasses its defence with spending on security per person highest in Tibet in 2017,” exclaimed Dr Sangay.

Highlighting the recent reform in the Chinese constitution removing the presidential term limit, Sangay added that though at the outset it heralds the consolidation of power in the hands of President Xi Jinping, but such authoritarian rule could lead to power struggle, which history tells us have led to the fall or disintegration of a nation.

“This coming three to four years is an important window for us,” said Dr Sangay.

President Sangay also spoke on the recent decision of US Congress to continue aid to Tibetan communities. "Congress's approval of $9 million aid to Tibetan community in India and Nepal in its budget for the fiscal year 2018 is an increase in the funding aid by $3 million, the funding which stood at $6 million during Congress’s budget for the fiscal year 2016. It also sends a political message. The bipartisan financial aid support by US Congress is a great honor and matter of pride for us,” he added.

"As this year marks the onset of His Holiness the Dalai Lama’s 60 years in exile and also of the thousands of Tibetans who followed him into exile, the US Congress's move is most welcome, and such aid and international support for Tibetans and their cause is solely due to His Holiness the Dalai Lama, who throughout his life has tirelessly worked for the well being of the Tibetans and the Tibet cause."