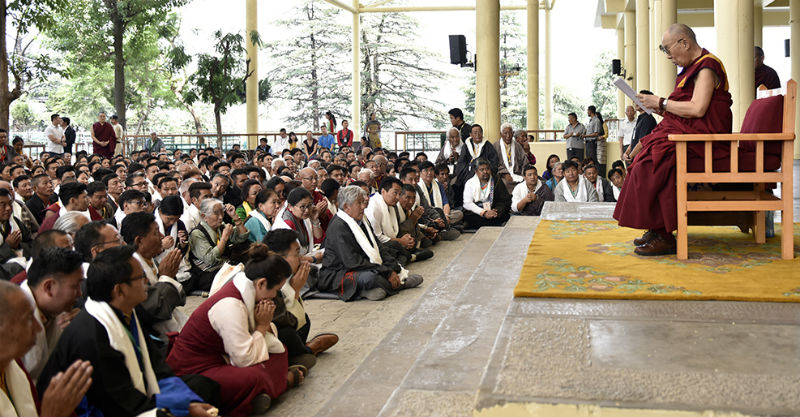 His Holiness the Dalai Lama during his meeting with participants of the first international conference on Umaylam, May 30, 2018. Photo: Tenzin Phende/CTA/DIIR

Dharamshala, India — “The Middle Way Approach is the most practical approach and mutually beneficial to both the Tibetan and Chinese,” His Holiness the Dalai Lama said on Wednesday during his meeting with participants of the first international conference on "Umaylam" (Middle Way Approach).

Over 600 Tibetans from different parts of the world and 170 Tibetans from various settlements in India and Nepal had gathered in Dharamshala, India from May 26 – 31, 2018, to participate in the International Conference, aiming to secure more confidence from the Tibetan public and bolster support from the global community.

“The guiding spirit of the Middle Way Approach is the pursuit of a mutually acceptable and mutually beneficial solution through dialogue, in the spirit of reconciliation and compromise. We resolved not to seek the separation and independence of Tibet but to strive for a solution within the framework of the PRC,” His Holiness said, while addressing participants of the conference.

His Holiness said that the Policy has a definite history of expert discussion and careful observations. “Despite all our sincere efforts to come to a peaceful settlement with the Chinese government, eventually in 1959 I, along with my Cabinet, had to go into exile. Soon after arriving in exile we began a series of discussions on this issue with, and solicited suggestions from, the Chairperson and Vice-Chairperson of the Assembly of Tibetan People’s Deputies, the Kashag and many scholars and experts on how to resolve the Tibetan problem through contact and discussions with the Chinese authorities. As a result, around 1974 we adopted the Middle Way Approach."

Explained that this policy change helped establish the first contact with China after coming into exile, His Holiness said: “In 1979 when the late Chinese leader Deng Xiaoping signaled a willingness for discussion proposed that “except independence, all other issues can be resolved through negotiations”, we were fully prepared to respond positively. I told Gyalo Dhondup to convey that we are committed to a mutually beneficial solution and not seeking independence.”

“As a result of this direct meeting, we have had successive fact-finding delegations and representatives who visited many areas of Tibet. The contacts have also allowed Tibetans in Tibet and in exile to visit each other. “Most importantly,” he stressed, saying “Middle Way Approach has received endorsement and solid support from a large number of Chinese scholars, activists, writers, public personalities.

His Holiness regaled the 1,000 articles and opinion pieces written by Chinese scholars and writers supporting the Middle Way Approach. These include a report by the Beijing-based legal NGO, the Gongmeng Constitutional Initiative, describing the suffering and grievances of the Tibetan people and calling for policy change. In 2012, 82 Chinese NGOs based in 15 countries sent a petition to the United Nations, the European Union, various Parliaments and Governments, exhorting them to “urge the Chinese government to start negotiations as soon as possible, to discuss issues including religious freedom, the rights of using and preserving Tibetan language and culture, and the Dalai Lama’s unfettered return to Tibet.”

His Holiness said one of the most important achievements of the delegation visit was the reinforcement of unity between Tibetans inside Tibet and those in exile. “The Tibetan delegation to Tibet have achieved to connect and reinforce the unity of Tibetans inside Tibet and those of us in exile. This is one of the key achievement of Middle Way Approach. Had we been calling for Rangzen, we wouldn’t have achieved this.”

Speaking about the growing global interests in Tibetan culture and religion in the last few decades, His Holiness said “More and more people now realize that Tibetans can contribute much to the world in developing inner values of peace and compassion; even well-known scientists are now deeply engaged in exploring and researching the scientific and philosophical aspects of Tibetan Buddhism in bringing holistic well-being to all human beings irrespective of their faiths”.

“Therefore through harnessing the potential teachings of our culture and religion, we have the potential to contribute to the greater good of humanity, and also serve the 400 million Chinese Buddhists in mainland China,” His Holiness said, adding that the Tibetan culture,and religion will continue to flourish and serve people. “In that view, Tibetan language and culture have played a crucial role in upholding the unity of Tibet and it continues to be so”.

The spiritual leader advised the people of Tibet to eschew the regional and religious divisiveness. “Regional and religious divisiveness results from short-sightedness. In the 7th, 8th and 9th centuries the three provinces of Tibet were united. Even after Tibet was divided into many territories, our language, culture, and religion have united all of us as people of Tibet. Tibetans employed the same script and followed what was explained in the Kangyur and Tengyur that are written in the common Tibetan language. To allow rifts in our unity is a mistake.

“Speaking from the religious point of view, although we belong to different schools of thought, we must remember that all our traditions, Nyingma, Sakya, Kagyu, Jonang and Gelug have their source in the Nalanda Tradition. Differences between us are relatively superficial. When we talk about Dharma, we need to be true to it in practice,” he stressed, further saying one can have political differences but one should not pit Rangzen vs Umaylam. One should not be overzealous and pit one against the other. The same goes sectarian differences.