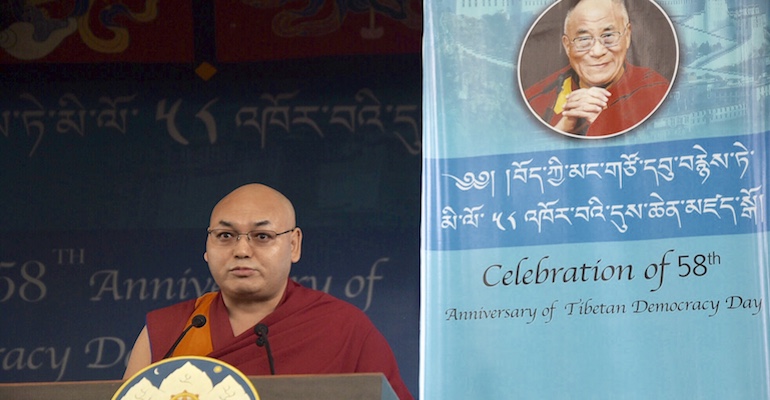 Dharamshala, India — To mark the 58th Anniversary of Tibetan Democracy Day, the Tibetan parliament-in-exile Monday said Within the framework of an authoritarian rule, China has, for many decades since its invasion of Tibet, from the period of the Cultural Revolution, continued to implement without any break various types of campaigns under different policies one after another.

"To the Tibetan people left behind in their occupied homeland, democratic freedom continues to remain a distant dream. On the contrary, over the past more than 60 years since the occupation of Tibet by the Chinese government, there has been a move to obliterate without trace the Tibetan language, religious heritage, culture, and customs and traditions, which represent the defining characters of the Tibetan nationhood, as well as to ravage the natural environment of Tibet," the Tibetan Parliament in-Exile said in a statement to commemorate the 58th anniversary of Tibetan democracy day in exile. .

"For these purposes, the government of China, to begin with, implemented in Tibet what it called democratic reforms, which was nothing but a euphemism for Chinese communist totalitarian rule. Within the framework of this authoritarian rule, China has, for many decades since its invasion of Tibet, from the period of the Cultural Revolution, continued to implement without any break various types of campaigns under different policies one after another," the Tibetan Parliament in-Exile statement said.

"Our brethren in Tibet have, starting from the year 1980, continued to stage peaceful protests on successive occasions. These have included the great Earth-Mouse Year uprising of 2008, and since from the year 2009, a total of 152 protest self-immolations has been verified and confirmed to have carried out by Tibetans. By these peaceful protests, Tibetans in Tibet have sought to express their disagreement with and rejection of the kind of policies as well as the kind of system of political education campaigns they were being subjected to by the government of China. Under criminal charges brought against them for political reasons, many Tibetans have been arrested, put behind bars, and put on trial," it added.

"Even to this day, China continues to expand its policies on the large-scale transfer of its population into Tibetan territories. In particular, it clings to a policy of unmitigated ethnic discrimination, so that when it comes to the demands and aspirations of the Tibetan people on the one hand and of the Chinese people, on the other hand, the latter keeps on being given the top priority. The Tibetan language activist Tashi Wangchuk was charged with inciting separatism and was tried in January this year," the statement said, adding: "The trial concluded in May with a guilty verdict, imposing him with imprisonment of 5 years. Recently, in July, Tashi Wangchuk’s lawyer appealed his conviction before the Qinghai Provincial Higher People’s Court. However, the appellate court simply rejected the appeal rather than entertaining and deciding it on the basis of a legally fair hearing. This is a matter of shame for the Government of China. Developments such as these show that the government of China continues to implement its erroneous policies in Tibet."

Speaker of the Tibetan parliament-in-exile, Khenpo Sonam Tenphel, gave solemn obeisance to His Holiness the Dalai Lama while delivering his statement on the democracy day. He joined thousands of Tibetan and well wisher at the main Tibetan temple in Dharamshala, India on Friday to celebrate the occasion.

"His Holiness the Dalai Lama, pioneering the establishment of the nature of Tibetan governance system with democratic values and characteristics, has, likewise, always adhered to guiding the essence of Tibetan freedom struggle with non-violence. As a result, the Tibetan people and their just cause have continued to receive support from all parts of the world," the statement reads, saying "Not only that, the Tibetan people’s cause has also received support from intellectuals in Mainland China as well as from a large number of other impartial Chinese people."

"Especially under the leadership of His Holiness the Dalai Lama, Tibetans uniting together as one entity, has worked as equal in different institutions and furnished in unison, their energy and capabilities towards the common struggle of their freedom, irrespective of their provincial or sectarian considerations. That this remains a continuing trend is a matter worthy of joy and pride among us all. Hence, taking the opportunity provided by this occasion, we offer our incomparable gratitude to His Holiness the Great Fourteenth Dalai Lama from the depth of our hearts on behalf of all the Tibetan people," it added.

Asserting that "Tibetan democratic system of governance in exile is a unique system, which incorporates the best characteristics of both the presidential and parliamentary system without any political factions," the Speaker said "It is a special kind of democracy, in which, the parliament is placed in the very heart of it all. In 1963, the constitution of Tibet was promulgated and later in 1991, the 11th Tibetan Parliament-in-exile adopted the Charter of the Tibetans in exile, which was duly assented to by His Holiness the Dalai Lama. Since then the Tibetan Parliament-in-exile has been able to proceed to function as a lawmaking body in full keeping with the functioning of such a constitutional authority. In 1992, the Supreme Justice Commission of the exile Tibetans was established."

"In 2001, the system of direct election of Kalon Tripa, the head of administration by the Tibetan public was instituted. In a more momentous event, which took place in the year 2011, His Holiness the Dalai Lama, keeping in view the multitude of pros and cons underlying the issue of Tibet, both at that time and for the enduring future, abdicated to devolve all his historical political and administrative authority and responsibility to the elected leadership of the Tibetan people in exile. In keeping with this act of truly great broadminded approach of His Holiness the Dalai Lama, Central Tibetan Administration has adhered to upholding of fundamental importance the laws as well as the rules and regulations passed by the Tibetan Parliament-in-exile. This is the basis on which the Central Tibetan Administration has administered its affairs under the democratic approach of the system of rule of law. As a result, the practices of the Central Tibetan Administration today, with its fully endowed three pillars of democracy, are such that we can justly take pride in it."

Highlighting the current situation regarding China's egregious human rights violations and abuses in Tibet by criminalizing basic human rights, he said, "Recently, in July, China announced that Tibetans who were yet to attain 18 years of age represented a loss to their ethnic group if they enrolled in monasteries for the purpose of pursuing religious study. In gross disregard of the Tibetan people’s historical habits and traditions, many young monks who were already enrolled in the Dza Sershul Monastery, the regional principal monastery at Lithang and others in Sichuan Province were forcibly taken away by the government of China."

"They were banned from being registered in monasteries. Rather, a coercive order was issued saying those young monks should be enrolled in schools for secular education set up by the government of China. Likewise, a general order was issued by the Chinese government in Tibet’s capital Lhasa, saying children in schools in the city were prohibited from taking part in religious activities during their summer vacation. With orders such as these, the government of China continues to grossly trample on the Tibetan people’s basic human rights, including their political rights, their right to freedom of speech and expression, and their freedom of religious belief etc," Speaker Tenphel added.

The Parliament statement also emphasizes His Holiness' tireless efforts to resolve Tibet issue through non-violent methods— Over the last more than 40 years, in keeping with the vision of His Holiness the Dalai Lama, and in accordance with the decisions finalized by the parliament in exile of the Central Tibetan Administration, we have resolutely adhered to the Middle Way policy, which is mutually beneficial to both Tibet and China. "We have continued to hope and believe, as we still do, that the Sino-Tibetan dispute could be solved through discussions based on this approach. We deem it inevitable that the government of China too will, over a course of time, be compelled by forces of evolving times and societal changes to take the responsibility to change its stand in a positive direction. We, therefore, deem it necessary to reiterate our call on the leadership of the government of the People’s Republic of China to give up its existing hardline position and instead enter into dialogue at the earliest possible moment on the basis of this approach, which is mutually beneficial to Tibet as well as China."

"As aspired by His Holiness the Dalai Lama from the very beginning, for the sake of the institutional stability of the Central Tibetan Administration and for the preservation and perpetuation of the Tibetan script, language and culture and so on, we should, on the basis of the tenets of non-violence, make use of the value and power of democracy to strive to achieve the just cause of the Tibetan people. This remains an important goal, both immediate and long-term, for all the Tibetan people. An indispensable attribute to this is the coherent unison of every Tibetan of the three provinces, akin to the complete cohesion of milk and water mixed," it said.

"This is the core of all our important purposes. So, to every Tibetan, with a firm pledge to abstain from creating any contradictions amongst the Tibetan people and keeping in heart, the beneficence and hopes of His Holiness the Dalai Lama, we earnestly request, to never waver in your enthusiasm towards the realization of our common future aspirations. Surmounting the daunting hardship present before our paths, we all must strive towards our common goal of the fraternal reunion of all the Tibetans in Tibet," the statement reads.

Emphasising the importance of the parliamentary activities carried out recently, the parliament said: "This year the Tibetan Parliament-in-exile launched a major initiative to solicit support for the issue of Tibet in different states across India and this remains an ongoing effort. Our aspiration is that through this solicitation, prominent figures throughout the country, especially members of parliament and state legislative assemblies, will gain a good grasp of the real situation in Tibet and accordingly render their strong support for the issue of Tibet."

"The people and government of India have and continue to facilitate the Tibetans with exceptional succor for over nearly 60 years of exile in India as well as the rendering of innumerable political supports by various nations all around the world, to achieve a fair solution to the just cause of Tibet. To such concerned public and governments, we, on behalf of all the Tibetan people, offer our heartfelt gratitude on this opportune occasion," it added.

Finally, the Tibetan Parliament in-Exile expressed its "pray with great ferventness that His Holiness the Dalai Lama, the Omniscient Conquering Spiritual Lord, the Incomparable Saviour of all sentient beings, the Most Benevolent One, may keep his two feet firmly planted on this earth until the very end of our times, with his great wishes being seen fulfilled with all its spontaneity, and the just cause of the Tibetan people accomplished in all speediness."