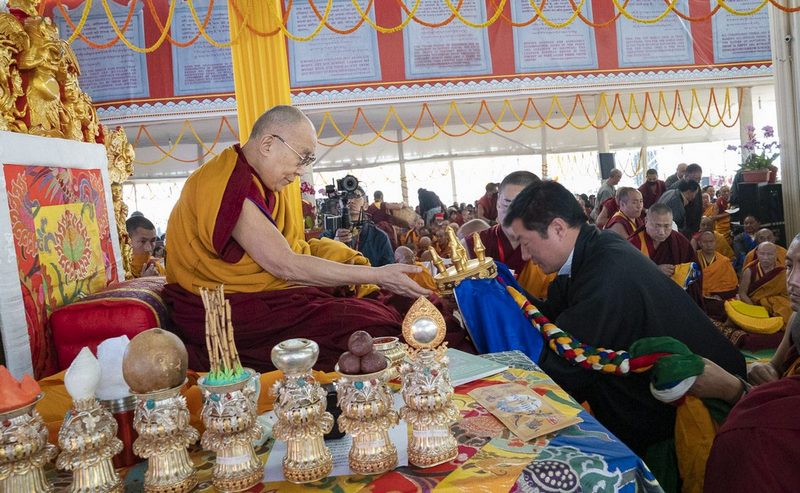 President Dr Lobsang Sangay on behalf of the Central Tibetan Administration presenting the offerings to His Holiness the Dalai Lama during the Long Life Offering ceremony at the Kalachakra Teaching Ground in Bodhgaya, 31 December 2018. Photo:Tenzin Phende/CTA

Bodhgaya, India — “I am healthy, my mind is sharp and I pray to live for over hundred years”: His Holiness the Dalai Lama told the large crowd gathering at the Kalachakra Ground in Bodhgaya, Bihar, India on December 31, 2018.

Speaking at the Long Life Offering ceremony organised by Central Tibetan Administration, Namgyal Monastery and Shelkhar Ngashap, His Holiness the Dalai Lama said, “At such a critical juncture in our history, I think I have done a considerable service to the Tibetan cause and people. Even today, I am very healthy, my mind is extremely sharp and I pray to live for more than hundred years to continue my service. Similarly, all of you should collectively pray.”

“On this occasion the oracles of Tibetan protectors like Nechung and Nyenchen Thangla will take part in trance. We, people and deities, all have a responsibility to work for the cause of Tibet.

“I sometimes tease Indian friends that their god Shiva’s permanent residence on Mount Kailash is located in Tibet, so he’s one of us, and the River Ganges, so holy to Indians, rises in Tibet. At the same time, Tibetans follow Buddha Shakyamuni, the Great Sage, who was an Indian. What this indicates is the longstanding special connection between Indians and Tibetans.

President of Central Tibetan Administration, Heads of the three pillars of Tibetan democracy which includes the Kashag, Tibetan Parliament-in-Exile and the Tibetan Supreme Justice Commission, heads of the Autonomous bodies and all the CTA Offices were represented at the Tenshug ceremony. “There are millions of Tibetans in Tibet who have expressed unwavering faith and prayers for my health and long life. I accept this offering as being made on their behalf,” His Holiness said.

The Tenshug ceremony also witnessed invocation of Tibetan protectors namely Nechung, Tsering Ché-nga, Kharak Khyung Tsün, one of the Twelve Tenma, Thanglha oracle and Machen Pomra. His Holiness the Dalai Lama told the gathering that he had requested all the protector deities related to Gaden Phodrang to be invoked to take part in the prayer offering for his long life.

“With their participation, today’s prayer offering will be symbolised as a collective prayer from both the people and the protector oracles of the land of snow.” His Holiness said, added: “I am given the title as the Crowning Jewel of Gods and Others, hence it is most appropriate that the oracles and humans jointly make this offering.”

"The Twelve Tenma protective goddesses have abiding links to Tibet. So this Long Life Ceremony will be offered by humans and gods on behalf not only of Tibetans in exile but also of the millions in Tibet who refer to me as Gyalwa Rinpoché."

"I feel clear in my mind that I have done some service for the cause of Tibet. I will pray that I live long and you, including the many here from the Himalayan region, can pray too," the Nobel Peace lureate said.

“They have existed for a long time to serve the flourishing of Tibetan Buddha dharma, the happiness of sentient beings and most importantly for the happiness of the people of Tibet," the spiritual leader said, adding: “Therefore, it is common responsibility of the humans and the oracles to work for the Tibetan cause.”

The Tenshug offering is also being observed for the pacification of all obstacles of this 84th year of His Holiness’ life, and for the fulfilment of his benevolent wishes.

Finally, the team of translators who have worked hard in recent days to translate His Holiness’s teachings into Hindi, Chinese, Korean, Vietnamese, Spanish, Japanese, French, Russian, Italian, Portuguese, Dzongkar, Mongolian and English, each offered His Holiness a silk scarf.