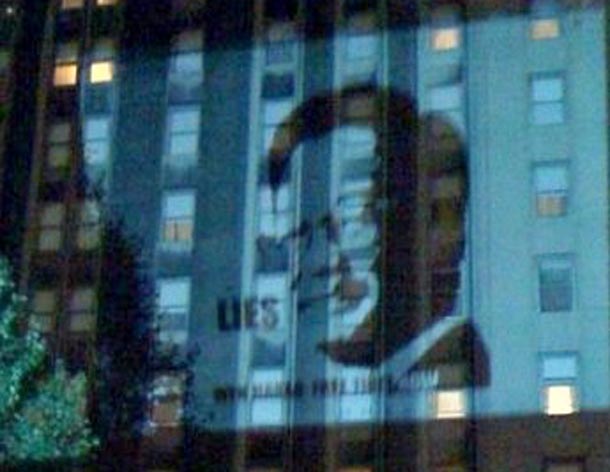 New York: Chinese Premier Wen Jiabao's New York visit was enlivened yesterday (September 23) by Students for a Free Tibet, who projected messages on to the side of the Waldorf-Astoria hotel where he is staying.

Protesters from several countries sent messages to @wjbny, which were then displayed in a live feed on to buildings in the area - an innovative approach to lobbying the premier who is in town for talks with the UN and President Barack Obama.

Toronto-based Tenzin Dhonyoe's message read, "Do the right thing and talk to HH the Dalai Lama. We will never give up to fight for our just cause". Tenzin Choedon, from Dharamsala, north India, tweeted, "Wen, with what China did to my people & my land you deserve all u r getting now. PROTEST!"

Meanwhile, Kathy Nguyen, who signed up for twitter especially to join the campaign, wrote, "No matter what you do, know that Tibetans will always be free in their hearts. Soon you will be gone. They will live on. Free Tibet!"

Sangay Tathi, of the Regional Tibetan Youth Congress of Minnesota, made a pun on "when", writing "WEN ever I see your face, I am reminded of the Freedom that Tibetans in Tibet are deprived of. Wen will you Free Tibet?"