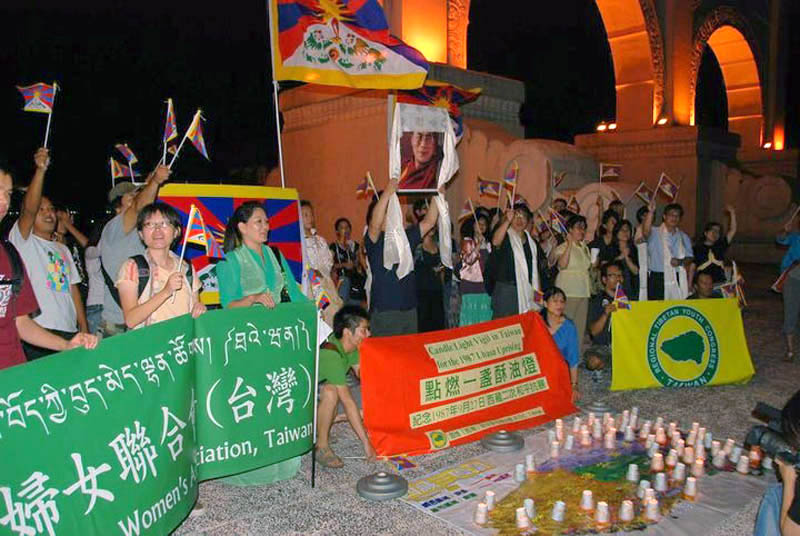 RTYC-Taiwan chairman Tashi Tsering inaugurated the event, which began at 19:00, saying, "It seems China would like to push Tibetans into terrorism. But their inherently good and peaceful nature won't allow them to become terrorists."

Dawa Tsering, director of the Tibet Religious Foundation of His Holiness the Dalai Lama, Taiwan, outlined the history of the 1987 uprising and described how Tibetan monks protested peacefully but suffered under Chinese oppression. "Tibetan people never give up the fight for freedom," he said, and thanked the Taiwanese people for their support.

Communist China invaded eastern Tibet in 1949, and in 1950 most of Amdo and Kham regions fell into their hands. On 23 May 1951, the Tibetan government was forced to accept the 'Peaceful Liberation of Tibet 17-Article Agreement'.

On 27 September 1987, 21 monks from Drepung monastery in Lhasa gathered in public to display the Tibetan Snow Lion flag and shout pro-Tibetan and pro-Dalai Lama slogans. This led to nearly two years of demonstrations and protests, thousands of arrests and an unknown number of deaths.

Speaking at yesterday's vigil, Lin Chia-fang, chairman of the Taiwan Human Rights Council, said that for China to publish human right reports is contradictory and a joke, asking how a nation with no human rights can publish such reports.

Mr Sun Youlian, president of the Taiwan Labour Front told the audience that, of two Asian Nobel Peace Prize winners, one - Burmese opposition politician Aung San Suu Kyi - is in jail and the other - His Holiness the Dalai Lama - lives in exile in India. "Many countries are afraid to break their political relationships with China," he said, "and refuse to support Tibetan human rights. But peaceful activists never stand alone."

Other guests at the event included: Janka, chairman of the Tibetan Welfare Association (TWA) Taiwan; Dolma Tso, chairperson of TWA Taiwan; and Lin Hsinyi, president of the Taiwan Alliance to End the Death Penalty .

Tashi Tsering led the vigil in shouting "Free Tibet", and "Long Live the Dalai Lama", before the attendees left peacefully, one by one, each holding a candle. The vigil concluded with group chanting.