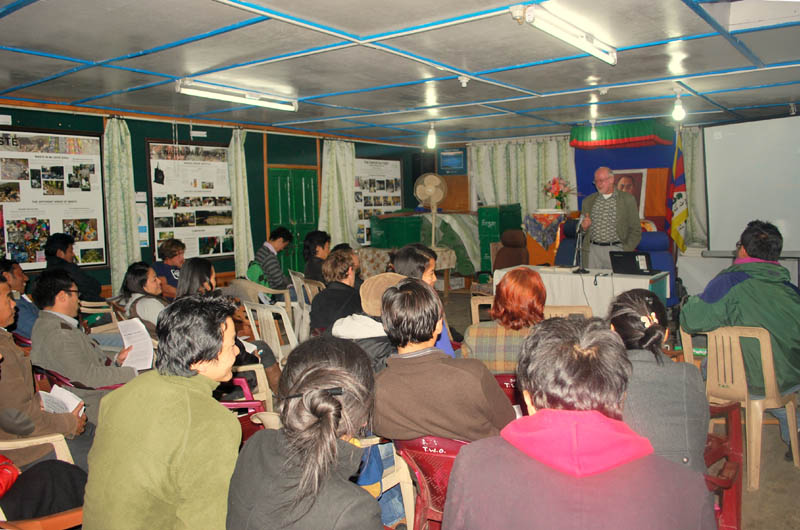 Dharamshala: A presentation by Mr Gabriel Lafitte, an Australian academic and development policy consultant to the Environment and Development Desk of the Tibetan Government-in-Exile was held in Dharamsala, northern India, on  Monday (Nov 22). Entitled China's Innermost Secret Fears, the talk was organised by the Tibetan Women's Association and attended by 30 Tibetans and foreign tourists, who also took part in a question-and-answer session.

Mr Lafitte's talk was held in the Tibetan Welfare Office Hall, and covered a range of aspects of China's occupation of Tibet and what the current political regulations really say about China's view on Tibet.

During the presentation Gabriel discussed the recent religious reforms brought in by Chinese officals saying, "Why do China's leaders insist they must oppress Tibet? There are many obvious answers to this most basic of questions, yet none of the usual answers get to the heart of China's fear and loathing of Tibetan culture, especially its leaders hatred of Tibetan religion. People say it is because the Chinese are communists and communists hate religion, as if nothing in China has changed since Mao told Tibetan spiritual leader His Holiness the Dalai Lama in 1954 that religion is poison.

"China's greatest fear is that modernity is skin deep, and is easily lost. The gleaming modernity of the glass towers is just a skin, covering what lies behind: a vast sea of seething irrationality, superstition, ignorance and mutual obligation, which modern China left behind only yesterday, which could reassert itself at any time. Modern China fears that its grip on modernity, and on the hearts of the masses who are yet to benefit much from modernity, is fragile, and could easily be shaken."