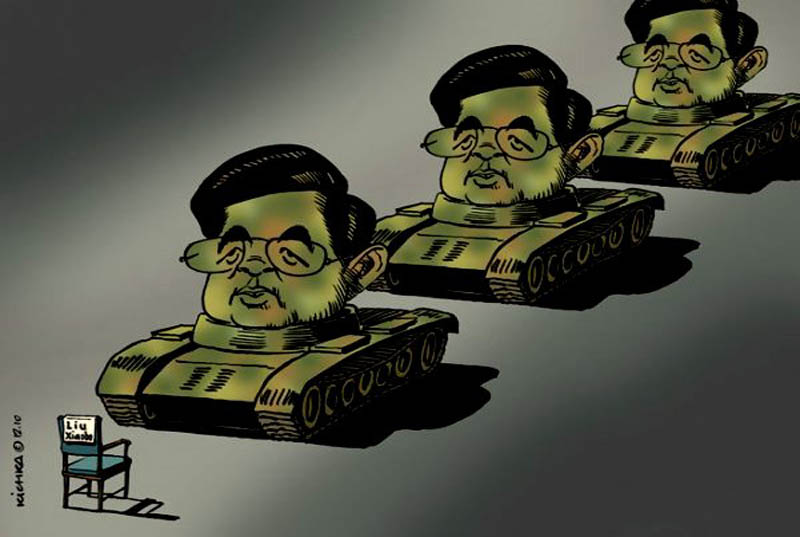 Paris: Reporters Without Borders reiterates its call for Nobel peace laureate Liu Xiaobo's release and urges the US government to firmly raise the issue of media freedom with Chinese President Hu Jintao and his delegation during the visit to U.S. that they are due to begin this evening.

Just four days ago, US secretary of state Hillary Clinton said: "America will continue to speak out and press China when it censors bloggers and imprisons activists, when religious believers, particularly those in unregistered groups, are denied full freedom of worship, when lawyers and legal advocates are sent to prison simply for representing clients who challenge the government's positions."

Reporters Without Borders hails Clinton's statement and calls on the Obama administration to put these good intentions into action.

"China is the world's biggest prison for journalists," Reporters Without Borders said. "This is an opportunity to criticise censorship's increasing hold over Chinese society and to ask President Hu Jintao directly to free Liu Xiaobo and the 106 journalists and netizens detained in China. The US government must seize this opportunity. This is how it can demonstrate its commitment to freedom of expression in China and elsewhere in the world."

Reporters Without Borders also deplores the fact that the US government allowed the Chinese delegation's press centre to organize the joint news conference that will be given tomorrow, as only "official reporters" will be allowed to ask questions.

The latest developments affecting freedom of expression in China:

The start of 2011 has brought no sign of any improvement in respect for free expression. This was highlighted by the directives that the Propaganda Department has been giving to journalists in the past few weeks.

Control of news and information is being tightened, Internet censorship is being reinforced, and the authorities have been broadening the range of methods used to harass those who defend free speech.

The renowned writer and cyber-dissident Li Hong (real name Zhang Jianhong), died on 31 December as a result a disease that that was not treated during his three years in prison.

A recently published interview has revealed that Gao Zhisheng, a human rights lawyer who has been missing since April 2010, was cruelly tortured during detention in 2009. His wife, Geng He, will be in Washington tomorrow.

Three Tibetan writers, Kalsang Jinpa, Jangtse Donkho and Buddha, were sentenced to three or four years in prison on 30 December for articles they had written for the magazine Shar Dhung-Ri (Eastern Conch Hill).

Tenpa Lodoe, a Tibetan writer who edits the magazine Dhunkyod (Walk-Forward) and who is better known by the pen-name of Gang-ga Champo, was arrested in Lhasa on 29 December because of his writings and his active defence of Tibetan culture. He is still being held illegally and his family is without news of him.

Han Han, the world's most widely read blogger with 440 million visits to his blog (http://blog.sina.com.cn/twocold), announced on 28 December that he would no longer publish his magazine, The Party, following pressure from the authorities.

Finally, Liu Xiaobo, now the world's most famous prisoner of conscience, is still serving the 11-year sentence he was given for campaigning peacefully for democracy in China. His wife, Liu Xia, is still under house arrest, and his relatives and supporters are still subject to all kinds of harassment by the authorities.

Reporters Without Borders today launched an international campaign in support of Liu Xiaobo in which people are urged to take pictures of themselves in the "Free Liu Xiaobo" T-shirt in recognizable locations all over the world.

You too can support the appeal.
For more information contact This email address is being protected from spambots. You need JavaScript enabled to view it.