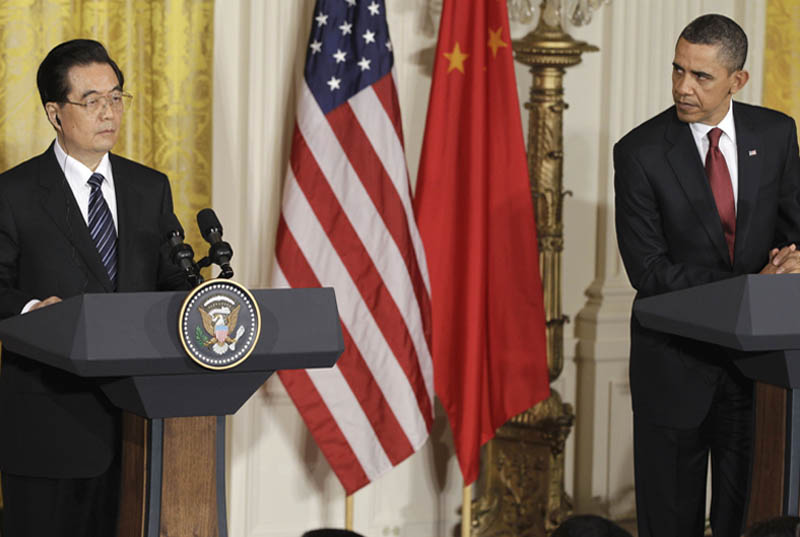 Washington: US President Barack Obama during a press conference in the East Room at the White House in Washington, DC, on Wednesday called his Chinese counterpart Hu Jintao to have dialogue with the representatives of His Holiness the Dalai Lama, the Tibet's political and spiritual leader, to resolve and address the concerns of the people of Tibet.

"Even as we, the United States, recognise that Tibet is part of the People's Republic of China, the United States continues to support further dialogue between the government of China and the representatives of the Dalai Lama to resolve concerns and differences, including the preservation of the religious and cultural identity of the Tibetan people," Obama said on 19 January at a joint news conference with Hu at the White House.

U.S. president Obama gave a long answer to a question about human rights only to find out that it had not been translated simultaneously. He appeared visibly frustrated while waiting for an interpreter to finish, and then Hu -- to the astonishment of U.S. journalists -- did not answer the part of the question that had been directed to him.

When a second U.S. reporter followed up later, Hu said he had not heard the initial question and gave a prepared reply, glancing down at his podium at times to read. White House spokesman Ben Chang said the human rights question had been been translated when it was first asked.

Obama said differences on human rights were an "occasional source of tension between our two governments.'' As the two leaders stood side-by-side at a nationally televised news conference, he called on China to live up to human rights values that he said were enshrined in the Chinese Constitution, adding that Americans "have some core views as Americans about the universality of certain rights: freedom of speech, freedom of religion, freedom of assembly.''

The Tibetan issue along with that of the human rights was strongly raised by Obama and his team during talks with the Chinese delegation led by Hu. However, according to the U.S media reports, there was no mention of Tibet in the joint US-China statement issued later in the day.

Just ahead of the Obama-Hu talks, as many as 39 Tibetan associations and support groups in the US had urged Obama in a letter to raise the issue of Tibet in particular human rights condition there with Hu. "President Obama understands the Tibet problem as a trespass against the Universal Declaration of Human Rights and a challenge to China's peaceful rise," said Mary Beth Markey, President of the International Campaign for Tibet.

Observing that Tibet is an integral part of the US-China relationship for moral, historical and strategic reasons, the letter said the position the US has adopted on Tibet creates an incumbent duty on this Administration to continue to raise the issue with Chinese leaders at the highest levels.

"Tibet must be on the agenda of your summit with President Hu," demanded the US-based Tibetan organisations. The Tibetan organisations also urged Obama that the Administration should continue to press China's leadership for results-oriented negotiations to achieve a political solution for Tibet and engage China in topical areas, including education policies pertaining to Tibetans and regional discussions on water security.

"Since the Tiananmen Square massacre in 1989, there has been bipartisan concern in the Congress about the human rights situation in China and Tibet, the support of the Chinese government for rogue states, and China's unfair trade practices, which have ballooned our trade deficit from USD 5 billion a year to USD 5 billion a week.

"In recent years, climate change and clean energy has also been a key focus of our relationship with China," said Nancy Pelosi, the Democratic Leader in the US House of Representatives. "It is my hope that Chinese President Hu Jintao's visit to the US is marked by candor and progress on these issues," said Pelosi in a statement.

Pelosi, the former Speaker of the US House of Representatives, has been a strong supporter of the cause of the Tibetan people. Earlier at a Congressional hearing, Congressman Christopher Smith alleged that Hu was responsible for massacre of people in Tibet.

"Let's not forget that in 1989, just a few months before the massacre at Tiananmen Square, Hu Jintao was Beijing's iron fist in Tibet, the man who ordered the savage beating of Tibetan nuns and monks, even children," said the US lawmaker from New Jersey. "There are eyewitness accounts of children being pummeled to death and the murder of hundreds of Tibetans. Hu Jintao presides over a gulag state, clearly a dictatorship," he said.

"President Hu is directly responsible for the systematic detention and torture of millions of peaceful Chinese, Tibetans and Uighurs," Smith alleged.