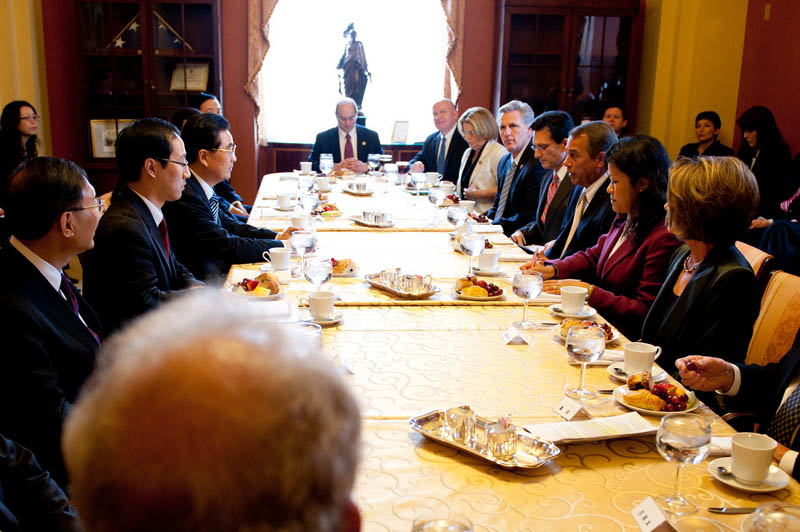 Washington: During his state visit to the United States, Chinese President Hu Jintao would have sorely avoid the Human Rights topic. After President Obama publicly raised the issue few days ago, Hu had to face interjections concerning China's policy during an hour-long meeting with White House leaders on last Thursday.

"We raised our strong, ongoing concerns with reports of human rights violations in China, including the denial of religious freedom, and the use of coercive abortion as a consequence of the ‘one child' policy. When it comes to guaranteeing the freedom and dignity of all her citizens, including and especially the unborn, Chinese leaders have a responsibility to do better, and the United States has a responsibility to hold them to account", declared speaker John A. Boehner after the meeting.

Democratic Leader Nancy Pelosi also asked China's President about the Tibetan freedom movement. Known as a strong supporter of the cause of the Tibetan people, Mrs Pelosi repeatedly pinpointed China's abuses and crackdowns in Tibet in the past. Last July, the former House Speaker called for a negociated agreement on Tibet and expressed her hope for "substantive discussions" between Chinese authorities and His Holiness the Dalai Lama.

During the meeting held last Thursday, Nancy Pelosi also tackled the detention of 2010 Nobel Peace Price, Liu Xiabo. "I had the opportunity to relay the concerns by Members of Congress on both sides of the aisle that Chinese human rights activist Liu Xiaobo was not permitted to travel to Norway to accept the Nobel Peace Prize in December, and about the continued detention of Liu and his wife Liu Xia, for peacefully exercising their rights to free expression", she said in a statement.

Due to her positions and involvment for human rights, China is said to have been "scared to death" over her visit in the country two years ago, and rejected her request to visit to Tibet, according to files recently displayed by Wikileaks.

As an answer to critics against China's policy, Hu Jintao denied his country had any expansionist intentions.

He also said that Taiwan and Tibet "concern China's sovereignty and territorial integrity and they represent China's core interests" during a luncheon with senior US officials and business leaders. "A review of the history of our relations tells us that US-China relations will enjoy smooth and steady growth when the two countries handle well issues involving each other's major interests," Hu added. "Otherwise our relations will suffer constant trouble or even tension," he warned.