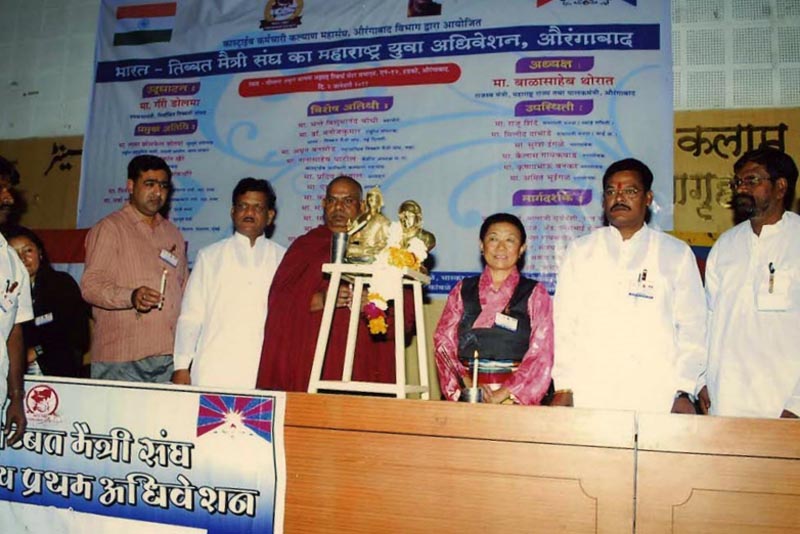 Dharamshala: The newly established Indo-Tibetan Friendship Society (ITFS) in Aurangabad passed a resolution seeking a 'Legislative Forum for Tibet in the Maharashtra State Legislative Assembly' during its first meeting this month.

Over 400 people, including the mayor of Aurangabad city and representatives of the Tibetan Government-in-Exile discussed major issues concerning Tibet on that occasion. The meeting especially highlighted environmental concerns, as Mrs Ngawang Lhamo, member of the Tibetan Parliament-in-Exile, denounced the deteriorating situation of Tibet's environment and its impact on neighbouring countries including India.

The topic has been at the core of debates concerning Tibet for many years. His Holiness the Dalai Lama already tackled the problem in 1996, during a conference called "Endangered Tibet" held in Australia. He especially underlined the importance of preserving forests and rivers. "Many of the rivers which flow through large areas of Asia, through Pakistan, India, China, Vietnam, Laos and Cambodia, rivers such as the Yellow river, Brahmaputra, Yangtse, Salween and Mekong, all originate in Tibet. (...) The pollution of these rivers has a drastic effect on the down-stream countries", he explained.

Recently, a conference held in Delhi described Tibet's environment as crucial for the survival issue of India and other countries irrigated by those rivers. Mrs Jaya Jaitley, a social activist, raised awareness on dams built on the Brahmaputra: "If India doesn't voice out against this then the whole of north-eastern region of India could one day become a desert if India is deprived of the water flowing from Tibet's glaciers", she said, adding that "it is in India's interest to see that Tibet's grazing lands are protected and that Tibet's waters are preserved".

During the ITFS meeting in Aurangabad, Mrs Lhamo also spoke on the current status of the dialogue process between the envoys of His Holiness the Dalai Lama and the Chinese authorities. She appealed for the support of the people and both the state and central government of India for the realisation of a constructive dialogue process.