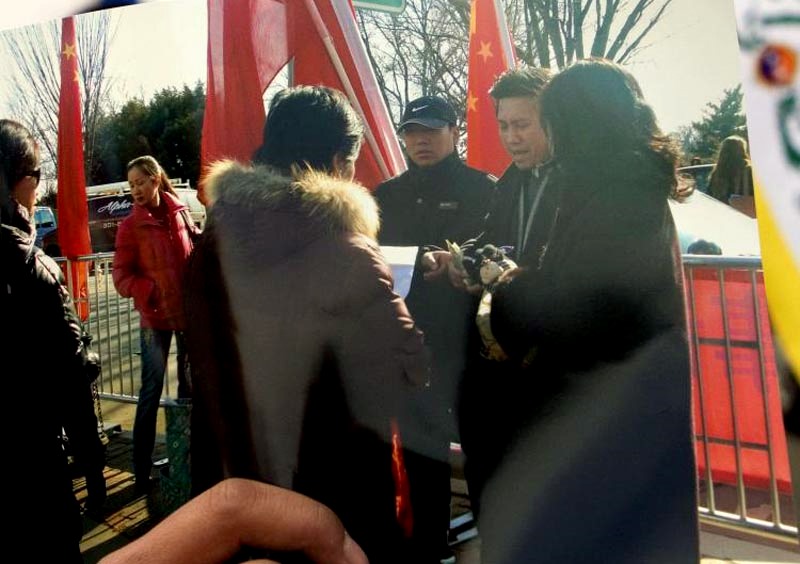 Dharamshala: The visit of Chinese President Hu Jintao to Washington, D.C. last week was heralded as a major step in China-U.S. relations, with the State dinner held in his honour being the first of its kind in thirteen years. The President's four-day trip was the subject of much planning and anticipation for the White House, and as it has been revealed, also caused a few headaches for the Chinese authorities.

The Chinese Embassy in Wasington was forced to pay between US$20-$80 to each of a large number of Chinese students to convince them to show up and welcome their own President, reports have revealed. Photos taken by Tibetan activists and posted by The Epoch Times (TET) show students receiving money from Chinese officials, and interviews with students by undercover journalists revealed that they had been paid to wave flags and chant slogans. One young man even claimed he was fearful of consequences for his family back in China, and only agreed to come to Washington so as not to displease the Chinese authorities.

It was established by TET journalists in phone conversations with Chinese Student and Scholar Associations (CSSA) that the Chinese government also paid the students' transportation and food costs, though officials kept this information secret, as they wanted the welcoming to seem natural and spontaneous. It is not clear if U.S. authorities actively cooperated in the farce or simply allowed it so that Hu's arrival would go smoothly.

Organising convincing welcome parties for their political envoys is obviously an important job for the Chinese authorities. Photos of a joyful and festive nature are needed as fuel for the Xinhua propoganda machine within China's borders, and photos of angry protesters holding placards and waving Tibetan flags would cause a great deal of embarrassment for the Chinese leader.

In a democratic country, however, you cannot control the views of the public nor prevent them from being expressed. As the bribed Chinese students put on their best false welcoming faces, the Tibetan activists who witnessed the transaction held up the incriminating photos, shouting "Shame! You were paid!" as a number of other protestors were shielded from the President's view.

The high profile of Hu's visit clearly made the Chinese Embassy nervous, knowing that on foreign soil they could not control public opinion as they can in China. They know well that Hu is largely seen outside of China as a communist dictator, albeit a slightly awkward and ridiculous one. Obama and Hu may have shaken hands, posed for lovely photos, and made a bold statement of cooperation to the world, but the people waiting voluntarily to greet the State visitor showed a far different reaction.

While Obama was cautious with his words on the subjects of Tibet and Taiwan and failed to engage with Hu on any real issue, the protesting public voiced their true opinions and opposition to China's continued human rights violations. It is not the first time a State visit from China has caused problems, for both American organisers and the Chinese Embassy, and it certainly won't be the last. After all, fooling 1.3 billion people is not an easy thing to do.