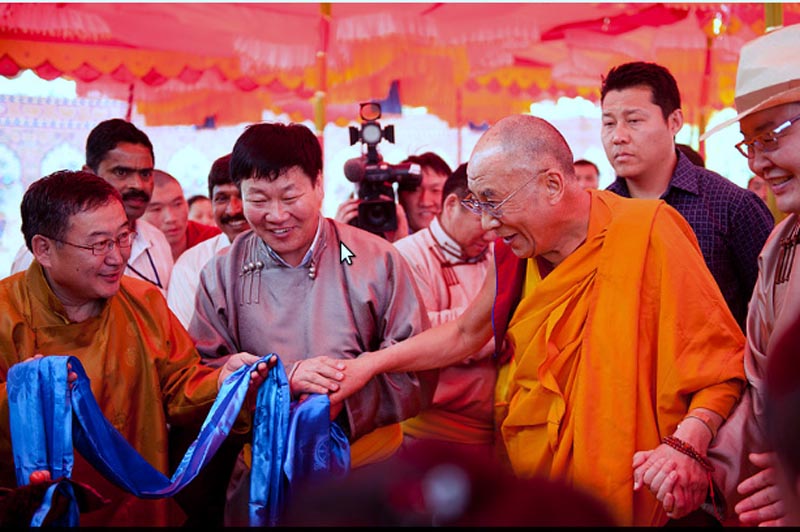 Mundgod: Tibet's spiritual and political leader His Holiness the Dalai Lama conveyed his greetings to over 300 Mongolians who have traveled to Doeguling Tibetan settlement in Mundgod to attend his teachings. "I express my warm greetings to ministers from Mongolia, foreign minister Mr Voroshilov Enkhbold, monks and lay people on the New Year. Tibet and Mongolia have a unique relationship dating back to more than a hundred years. That relationship had widened as both Tibet and Mongolia faced great difficulties under communism, particularly immense destruction caused to Buddhism," His Holiness said.

Remembering the centuries old unique bound between Tibet and Mongolia, His Holiness the Dalai Lama extended his greetings to Mongolian students and devotees at Drepung Gomang Monastery on their New Year on Friday (04 January 2011), according the Tibetan official media "Tibet.net."

"However, the contacts gradually revived as Mongolia sends its monks and nuns to study in great Tibetan monasteries which were re-established by the Tibetans in exile. As for me, I visited Mongolia for the first time in 1979. Not only Tibet and Mongolia are same followers of the Nalanda tradition, but they are the only two who are carrying forward the pure form of that tradition among the world's hundreds of millions of Buddhists," His Holiness added.

His Holiness underlined the importance of applying the Buddhist science of logic in teaching methodology in schools. "Nowadays, Western scientists are taking special interest in Buddhism and many of my friends among them have told me about the usefulness of using dialectics in teaching different subjects in schools. In the Tibetan schools in exile, we are preparing to teach subjects like science and mathematics using dialectics. If this becomes successful, then it would be very beneficial to introduce such method in schools in Mongolia. I have a good experience that the process of learning through analysis by using one's mind and logic is more meaningful."

His Holiness said the diligence of the Mongolian students studying in Drepung Monastery would definitely make a valuable contribution to the education system in their country.

Speaking on Dolgyal propitiation, His Holiness said "over 99 percent of Tibetans have believed in me and they do that with reason. But a small section of Tibetans do not think about reason and remain in blind faith. It is my responsibility to explain, but to listen to it is ones' own freedom."

There are around 230 Mongolian monks at Doeguling Tibetan settlement in Mundgod, of which the majority are at Drepung Gomang Monastery in a separate unit called Samlo Khangtsen.