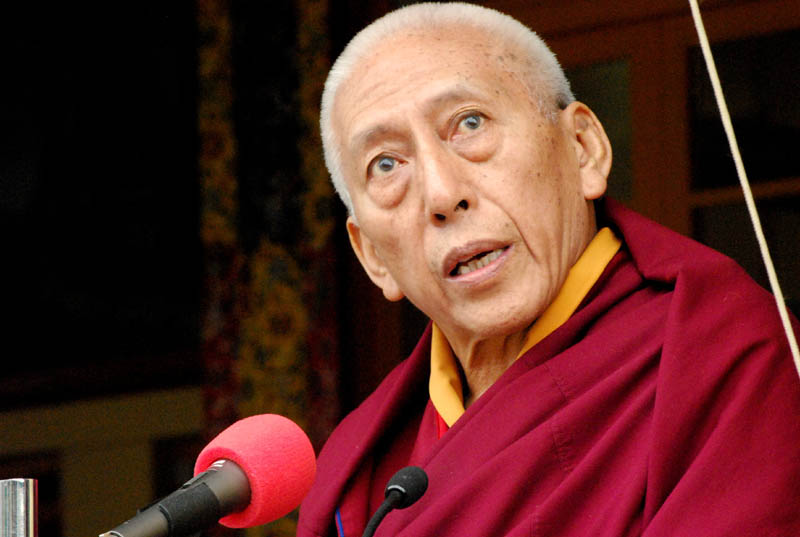 Berlin: The Tibetan people have to manage themselves without Tibet's spiritual and political leader His Holiness the Dalai Lama's patronage, said Tibetan prime minister (Kalontripa) Prof. Samdhong Rinpoche on Thursday (17th February) in Berlin during a round table discussion with journalists.

"Better to face the reality now, Tibetans will have to face it sooner or later," the Tibetan PM told the reporters, according to a report of the exile Tibetan government official media "Tibet Net" published on February 18. During a media interview last November in New Delhi, His Holiness the Dalai Lama had expressed his wish to retire from political life. His Holiness further said that he will ask the forthcoming session of the Tibetan Parliament in March to debate on the issue.

Dharamshala has received hundreds of letters and appeals from Tibetans all over the world. In early January, the Standing Committee of the Tibetan Parliament-in-Exile requested His Holiness not to retire and continue to lead the Tibetan people.

Since the establishment of the Ganden Phodrang Government of Tibet by the 5th Dalai Lama in 1642, successive Dalai Lamas have been the spiritual and political leader of Tibet. There is an extraordinary bond between the Dalai Lamas and the Tibetan people.

Speaking on the forthcoming Tibetan elections, Kalontripa said the Tibetan people's participation and awareness was much higher. He said that the future role of the Kalontripa will become more important given His Holiness the Dalai Lama's recent statement.

When asked to comment on the present situation inside Tibet he said, "The situation inside Tibet today is very serious. 2008 peaceful uprising was forcefully repressed. This repressive measure continues. Tibetans and other minorities are in constant fear. Detention and disappearance are order of the day. Tibetan poets and writers are under attack."

He expressed his admiration for the younger generation of Tibetans. "They have the greatest patience and determination," he said. Only a small percentage of the youth talk about violence but so far, no individual have advocated violence.

"Our commitment to non-violence is not a strategy," said Kalontripa. "It is our principle and faith." When asked why the Tibetan issue was more popular than other movements, he gave three reasons:(1) His Holiness the Dalai Lama ­- a charismatic leader (2) Non-violence -­ strong commitment and (3) Tibetan spiritual culture - day-to-day relevance to people.

Prof. Samdhong Rinpoche, the exile Tibetan PM was invited to Germany by the Tibet Initiative Deutschland, the oldest Tibet Support Group in Germany. He said that the visit also provides him an opportunity to thank people for their support for the Tibetan issue. He said Germany is one of the most important countries.