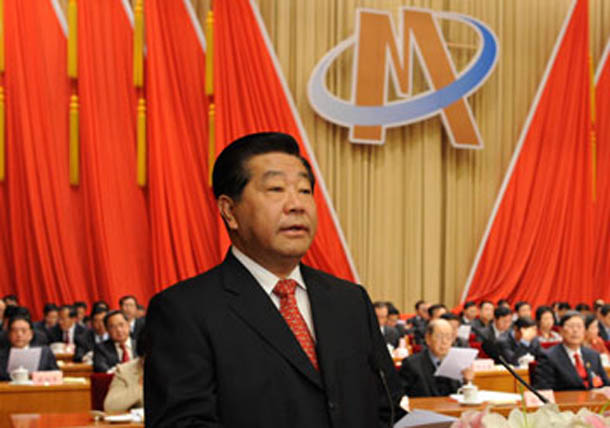 Dharamshala: According to a report from state controlled media 'Xinhua,' a top Chinese Communist Party official has called for a renewed fight against Tibetan spiritual leader His Holiness the Dalai Lama's influence, as well as strengthened controls over Tibetan Buddhism.

The official Jia Qinglin's comments come weeks ahead of the 52nd Tibet National Uprising Day, and the 3rd anniversary of the most widespread uprising against Chinese rule by Tibetans in decades, which occurred in the lead-up to the 2008 unrest in Tibet.

China blamed the exiled spiritual leader His Holiness the Dalai Lama for fomenting the disturbances on March 14, 2008 which saw protest  against Chinese rule, in Tibet's capital, Lhasa. But, the protesting Tibetans, including Buddhist monks from the Jokhang Temple of Lhasa clearly told world media that the Nobel Peace Prize-winning His Holiness Dalai Lama and exile government were not behind the mass demonstrations that also spread to all parts of Tibet.

"The fight against the Dalai Lama clique must be continued and deepened while each task in maintaining stability must be circumspectly deployed," and "issues related to Tibetan Buddhism must be handled well," Jia was quoted by the state controlled media Xinhua as telling party officials at a meeting Thursday.

Jia also claimed the 'enhancement of ethnic unity, improved social management, and maintenance of social harmony' as reasons for the proposed crackdown, suspected to be an attempt to prevent another round of protest like the one in March 2008.

The Tibetan side says one of the fundamental points that the Chinese officials fail to acknowledge is the fact that His Holiness the Dalai Lama is sincere and serious in his efforts to find a solution within the framework of the People's Republic of China, through his Middle Way Approach.

"The Middle Way Approach is a way to peacefully resolve the issue of Tibet and to bring about stability and co-existence between the Tibetan and Chinese peoples, based on equality and mutual co-operation," Lodi Gyaltsen Gyari, Special Envoy of H.H. the Dalai Lama remarked on November 24, 2010, at the Institute of South Asian Studies, Singapore.

However, China accuses His Holiness the Dalai Lama of seeking to separate Tibet from China, despite his claims to be working only for a higher degree of autonomy under Chinese rule.

China says Tibet has been a part of its territory for at least four centuries, while Tibetans say Tibet was a fully functioning and independent state before the Chinese invasion. It threatened none of its neighbours, fed its population unfailingly, year after year, with no help from the outside world, and owed nothing to any country or international institution. China's invasion of Tibet was led by the Communist Party of dictator Mao Zedong in the year the party took over China in 1949.