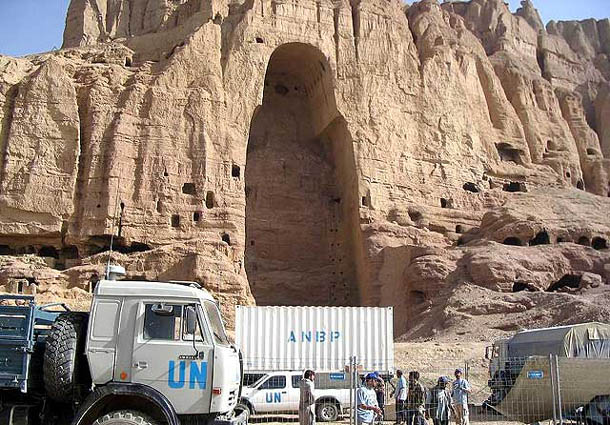 Dharamshala: - On the eve of the 10th anniversary of the destruction of the giant Buddha statues of Bamiyan, in Afghanistan, by the then-ruling fundamentalist Taliban ten years ago, the United Nations cultural chief Monday called on the world to protect the heritage of humanity from damage, turmoil and theft.

monumental statues had stood for one and a half millennia as proud testimonies to the greatness of our shared humanity," the Director-General of the UN Educational, Scientific and Cultural Organization (UNESCO), Irina Bokova, said in a statement. "They were destroyed in the context of the conflict devastating Afghanistan and to undermine the power of culture as a cohesive force for the Afghan people."

"Since then, we have witnessed other instances where cultural heritage has fallen prey to conflict, political turmoil and misappropriation," she added, calling on governments, educators and the media to raise awareness of various international accords preserving cultural properties and banning looting, smuggling and the illicit trade in cultural objects.

Tolerance and cultural rapprochement will be the theme of a commemorative forum at UNESCO's Paris headquarters on 2 March, followed by the 9th Bamiyan Expert Working Group on 3 and 4 March - both of which are being organized with Afghanistan's Permanent Delegation to UNESCO.

Formed in 2002, the Expert Working Group brings together Afghan officials, international experts, donors and other stakeholders with the aim of safeguarding Bamiyan. The future of the niches and options to present the remains of the Buddha statue will be among the subjects to be examined by the group next month.

UNESCO does not favour rebuilding the Buddha statues, but the experts will examine other ways to present the remains and niches while maintaining research and preservation at the site, which testifies to the region's rich Gandhara school of Buddhist art that integrated different cultural influences from East and West during the 1st to 13th centuries. The holy site in the region contains numerous Buddhist monastic ensembles and sanctuaries, as well as fortified edifices from the Islamic period.

However, China has cheered the U.N. silence on its human rights record for last 50 years. It seems that the UN will likely keep silent about China's religious freedom in Tibet. The Tibetan people were unwilling to accept Chinese occupation. Unrest escalated throughout the decade after 1950, culminated in the Tibetan Uprising of 1959. According to various sources 80,000 Tibetans killed in Central Tibet alone during and immediately after the uprising. It is estimated that since 1959, 1.5 million Tibetans have killed as a direct result of Chinese incursion into the country.

During 1959 many thousands of Tibetans, including the Dalai Lama, sought asylum in India. The exodus of Tibetans from Tibet continues to this day. In the decades following 1959, particularly during the so called Cultural Revolution, there was wholesale destruction of Tibetan buildings and religious artifacts. All but 12 of more than 6,000 monasteries were destroyed. Many of them were used as target practice by Chinese artillery.

A thousand years' worth of priceless Buddhist literature, religious paintings and artifacts were either destroyed or have fetched millions of dollars on the international market in an effort by the Chinese to raise foreign currency and to wipe out Tibet's rich heritage. Today, more than 200,000 Tibetan refugees, including Tibet's political and spiritual leader His Holiness the 14th Dalai Lama, live in exile in India, Nepal, Bhutan, Switzerland, the United States and Canada, Australia, New Zealand and elsewhere.