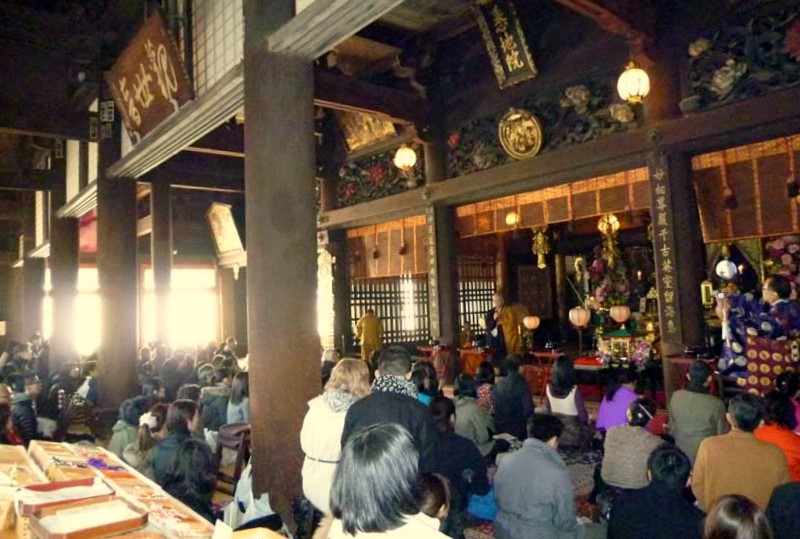 Tokyo: A grand prayer gathering was conducted at Gokokuji, a Japanese Buddhist temple in Tokyo to mourn and to pray for the victims of the recent earthquake of 9.0 magnitude and tsunami that devastated the North-Eastern Japan and areas around it. Tibet House Japan organized the prayer event in collaboration with Association of Japanese monks.

Rev. Okamoto, Chief Abbot of the Gokokuji Temple thanked the organizers for this initiative to organize the prayers for the victims of the natural calamities and for the early restoration of normal life. "We are very grateful and obliged that His Holiness the Dalai Lama in India has conducted prayer gathering in Dharamsala for the victims." He said.

Dr. Barry Kerzin, an American Buddhist monk scholar gave a brief and simple explanation of Heart Sutra to the audience. "Hangyashingyo, [Heart Sutra in Japanese] is the deepest expression of love and compassion in Buddhist teaching. Lets recite this sutra with love and compassion for all those who suffered and are suffering in affected area." He said. Dr. Barry explained about the origin and deeper meaning of the sutra to the audience.

Tibetan monks of Gomang monastery at Manjushri Mahayana Buddhist Association in Hiroshima led the prayers in Tibetan wherein Tibetan version of Heart sutra was ricited several times. It was followed by Heart sutra recitations by Japanese monks and general public. During the recitation the participants offered incenses at the alter in turn. Around 150 Japanese and Tibetan monks, and general public gathered to participate in the prayer.

Rev. Hayashi, Chief Representative of Association of Buddhist monks thanked the Tibetans and the participants for their sincere initiative to pray for the people affected by the disaster and hoped that the prayers would help alleviate the sufferings of the people. Mr. Lhakpa thanked the participants at the conclusion and informed that 49th day prayer gathering will also be done at the Temple.