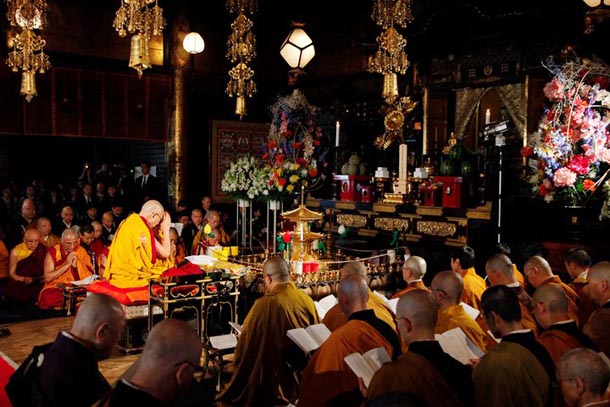 Dharamshala: - Tibetan spiritual leader His Holiness the Dalai Lama offered a special prayer during a Buddhist ceremony Friday for the victims of the March 11 earthquake and tsunami at Gokokuji temple in Tokyo. Friday marked the 49th day since the disaster.

This mass prayer meeting also took place on the 49th day after the tragic events, which according to Buddhist tradition is the end of the formal mourning period. The prayers were held at Gokokuji Buddhist Temple in Tokyo Japan, on April 29th, 2011. The Buddhist leader told the crowd that despite the suffering and destruction there is "no reason to feel discouraged and remain hopeless,"

In many Japanese schools of Buddhist thought, the dead wander near their homes for 49 days before heading into their next stage of existence on the 50th day. The spiritual leader also encouraged survivors to "work hard, with full self-confidence."

The Tibetan spiritual leader urged the Asian nation to look to the future. ''What I can do is to pray and offer my sincere condolences to the victims,' His Holiness said on his first visit to Japan since the nation's biggest recorded earthquake and tsunami ravaged the northern Pacific coastline on March 11.

'The earthquake was a disaster caused by nature. The tragedy caused by the nuclear plant accident was a problem created by mankind. From this, sufferings and worries arise in hearts", he said. 'What happened, happened. I hope that work will start with eyes firmly set toward the future.'

The 75-year-old spiritual leader, who was en route to the United States, visited Japan to say prayers at Gokokuji Temple in Tokyo, where Tibetan monks in orange robes sat alongside Japanese monks. The disaster left more than 25,000 dead or missing and crippled a nuclear power plant, which has been releasing radioactive materials into the environment and forced the evacuation of tens of thousands living nearby.